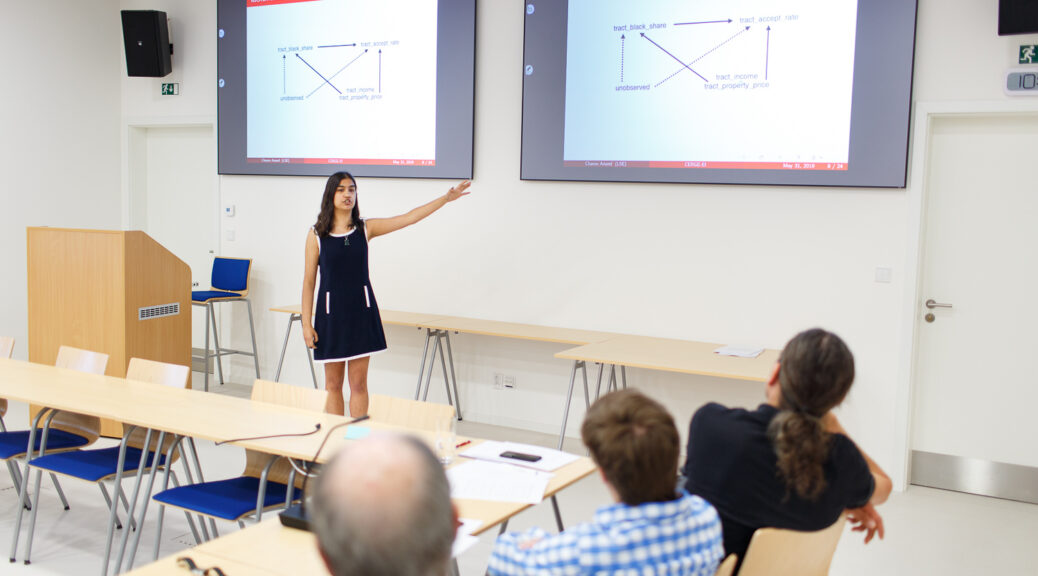 New Economic Talent (NET) competition Winner Charoo Anand (LSE) focused on the role of discrimination in the mortgage lending race gap in her paper. We were happy to speak with her about her paper as well as about her future plans. When asked about her other talents, Charoo also told us a bit about her non-economic self.

Maths was always my favorite subject as a kid and, when I was doing my A levels, I had fantastic history teachers. If I hadn’t done A-level history, I would have studied pure mathematics at university. My choice to do an economics degree was a sneaky way to avoid dropping either subject.

I think it was a good choice! It’s just super satisfying to look at messy real-life social phenomena and to systemize and quantify them. I really enjoy going back and forth between qualitative human stuff and quantitative methods. I guess most people’s answer to this question is some version of this.

Last year’s winner, Sitong ‘Jerry’ Ding, was in my undergrad. cohort and we both wrote our papers for the same class. When he won, I saw loads of pictures of him on Facebook and he looked so happy! Also, I thought the picture of him with the giant check was a pretty baller. When I realized that I could apply within a year of graduating I thought I should try.

Sure! So the question is ‘Do mortgage lenders discriminate against African-American areas’? And I find that about 60% of the mortgage lending race gap can be attributed to discrimination.

It’s an important question because there’s a history of institutional bias and, when you look at today’s numbers, there’s still a big race gap. So you have to wonder if this kind of racism still goes on. The issue is that it’s tricky to identify discrimination without running an experiment. Income and racial sorting within cities happen simultaneously so it’s hard to find an area with a different racial composition that doesn’t also have systematically different economic characteristics. I resolve this by looking at African-American chain migration into neighborhoods in Chicago. With chain migration, people follow their friends and family into neighborhoods, rather than self-selecting into areas based on their economic characteristics. This provides a way to pick out areas with higher African-American population shares while controlling for unobservable economic characteristics.

To be honest, it was a real ego boost. After working on the same thing for a while, I started to take many of its strengths for granted, while remaining hyper-aware of all its weaknesses. Preparing a presentation forced me to go back to the beginning and to distill the paper down to the most compelling 15-minute story. This exercise reminded me of its strengths and I’m now way more excited to keep working on it. Don’t get me wrong, I still think there are flaws, but I’m now addressing them rather than throwing it all out. Of course, the professors’ feedback will be helpful as I pursue this further. Also, if anyone has any tract-level financial data, please hit me up!

Meeting the previous finalists (and CERGE-EI students) was so fun! I’m so lucky to have been involved during the 5-year event. Honestly, it was like summer camp when you’re younger and you hang out with other kids for two days and feel like you’re already best friends. I’m hoping we all get invited back soon so we can win the Graduation Gala quiz again.

I liked hearing about people’s jobs and hometowns and the military service loopholes in various countries. My school is very international so in some dimensions, it’s incredibly diverse. But when I was at CERGE-EI, I realized that there are some ways in which it really isn’t. Confronting that was useful.

I’ll be in academia for a while, I think. I finished my undergrad. in 2018 and over the last year I’ve been working as a research and teaching assistant. I’m having a good time: writing code, reading books, talking about micro, etc. I’d be very happy to keep doing this indefinitely. I’d love to do a PhD. On the other hand, I hate the GRE.

“Talent” might be too generous a word but I play a bit of basketball. I recently joined a league and my team is called ‘Nets and Bolts’. We’ve lost every single game this season but I truly think our ball movement is improving and I have high hopes for the upcoming season. With regards to my talent, I’ve got a pretty reliable jump shot.