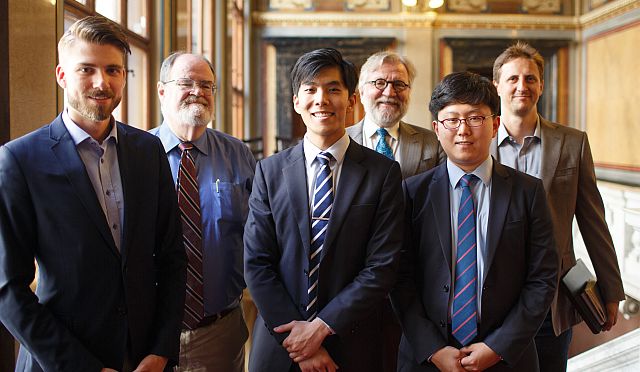 Final round of the New Economic Talent competition, which CERGE-EI organized for the fourth time,  took place on June 1. All three finalists presented excellent papers, and we had the pleasure to get them know better during the events that followed.

Read our interview with Sitong Ding (London School of Economics), who won the first place for his paper “Bounded Rationality in Rules of Price Adjustment and the Phillips Curve”.

The best thing about studying economics is how vibrant it is in terms of both its multi-disciplinary nature and the art of practicing it in policy.

Few subjects I know explain history or make predictions for the future through the lens of mathematics, which, through certain simplified models (or equations), has the ability to illuminate so many powerful insights that relate to the role and behaviour of firms, governments, financial intermediaries and central banks. As economics is ultimately a study of human behaviour under certain (e.g. budget) constraints, there is often a role for psychology as well, which, for a long time, has  made an impact on, for example, the study of the formation of expectations in macroeconomics.

In reality, most things are caused by many coinciding forces and it may often be difficult to truly disentangle the true cause and effect and so this ‘identification problem’ in practicing economics always keeps it interesting. In practice, the economist often has to make a judgment on how to act, based on a limited information set (which includes the conclusions of certain models). Here, any student of economics would realize that no one model is truly the be-all and end-all for policy decisions, and having to make a policy decision under uncertainty involving severe consequences is sometimes more an art than just logical science. You have all this packaged into a single subject called economics!

The person who inspired me the most is A.W. Phillips Professor Ricardo Reis, who was my thesis advisor and who taught me intermediate macroeconomics. He was the one who inspired me, in his own ways profound, providing a benchmark of an economist that I will always strive towards. (He even taught me economics that hasn’t made it into any textbooks!) This experience of learning from him directly will always be my anchor.

I think this is the question that I struggled with the most because it is hard to imagine how my life would be without economics. In fact, the 2008 financial crisis was my equivalent of Milton Friedman’s experience with the Great Depression, which led him to pursue economics rather than be an actuary. For me, rather than be an actuary, the alternative would most likely be a pilot. When I was younger, I had a replica of a Boeing 747-400 aircraft as my favourite toy, and I still find this the most beautiful plane there is in the industry, even though more and more of them have been retired from service.

I think creative thinking is something that one ought to nurture, which broadly requires having a level of conscientiousness and open-mindedness that enables one to connect the dots between seemingly unconnected events or causal chains. This is then particularly important for ground-breaking research, when one idea becomes extended to another idea (or model) in a way that has not been done before. These things do not just come to one’s mind without practicing creative thinking – or asking creative questions.

I fondly recall being in the queue during my first year at the LSE to meet Ben Bernanke when he was on campus to deliver a public lecture on his memoir The Courage to Act. There was I, a fresh undergraduate who had long read about such central bankers, marvelling at this opportunity to listen to Bernanke speak in person on the decisions that he had to make as the then-chairman of the Fed. In the three years at the LSE that followed, I was able to meet many others in the academic community that were equally well-known by the profession, such as Bob Shiller, Richard Thaler, Raghuram Rajan, Mark Carney, Kenneth Rogoff, etc.

Besides their passion for economics, these economists are also humble in what they know and are more evidence-based. One example here is Sir Charles Bean, who always filled his monetary economics lectures with his own personal experiences while he was at the Bank of England’s MPC. He is one of the many whom I have met, who does not just believe in models completely but also reconciles with what he observes in practice.

Many of these economists, including my own adviser Ricardo Reis, have published widely in many of the top journals and they all have a decent standing in the profession. Yet, they are deeply aware and acknowledge the things that they might have less conviction in, including the theories and models that don’t quite reconcile with evidence and data. This seems to be the common similarity to all of them.

But again, it’s no surprise that this is likely to be the hallmark of an outstanding economist because the nature of economics itself seldom yields a unique and static answer to most questions. Equivalently, one may also say that they have a conviction towards economics. Here, I am reminded of a line in Paul Krugman’s article Incidents from my career, which brings out another flavour of my attempt to this question: “…we all want power, we all want success, but the ultimate reward is the simple joy of understanding.”

At the moment, I am graduating as an undergraduate from the LSE, and will be joining an investment bank to gain experience with their macroeconomics research team in Singapore. I can’t wait to reconcile the best of both academic economics and sell-side economics research! It is my belief that my experience writing a paper, together with the many models that I’ve learned, provide me with the grounding to think about things that we may observe in the real world, such as financial market developments and the behaviour of central banks. In the near future, I hope to spend more time studying and tinkering with data, applying them and using them together with academic models to sieve out the underlying narrative. In other words, I am most looking forward to becoming an economist!

Thank you, Sitong, for your time.  We wish you all the best for all your future projects!