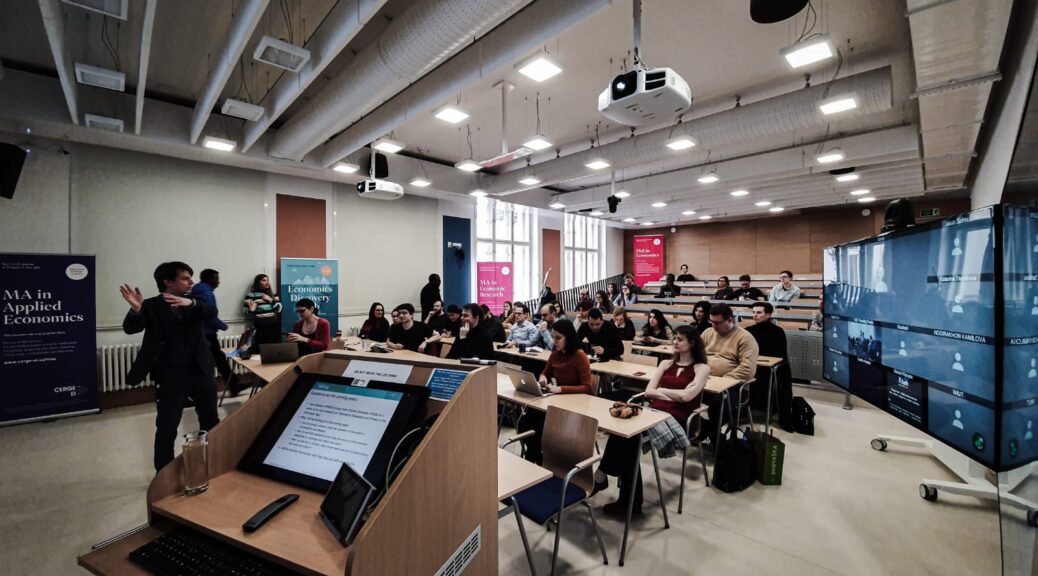 To identify an exact definition of an economist is a real struggle. Who is an economist actually? Is he or she a business consultant or perhaps an analyst? The CERGE-EI director, Sergey Slobodyan, opened the first lecture of the Talking Economics! series on Thursday with such questioning. “When you go buy a cup of coffee, such an event is considered an economic transaction. But is the person selling the coffee an economist?” he added.

In the first round of presentations from CERGE-EI Assistant Professors, Ole Jann and Christian Ochsner, we learned that the world seen through the eyes of economists is vast and this fact shows in the topics they have chosen for their research.

The work conducted by Ole Jann is mainly motivated by getting deep theoretical insights into important practical topics, such as debate, privacy, coordination or rumors. Ole introduced us to his current paper on “Privacy on the Internet” and addressed the results of his research accordingly. “All electronic devices process data about us several times a minute. Whether we read emails or surf social media platforms, it all generates data with a vastly significant value for the companies that possess those data,” he commenced his presentation. “Consumers hand over their information for better prices in company loyalty programs and convenient insurance programs,” he added. So, what is at stake? Should access to our personal information be regulated? Or is it beneficial for society? Does privacy only benefit an individual, or also society?

He demonstrated his research findings through the example of a girl, Alice, who shares her opinion on drug legalization on social media, and in the course of time starts looking for a job. The employer of a company she applies to, let’s call him Bob, looks her up online and sees the statement she shared on drug legalization. He decides not to invite her for a job interview, as he is against drug legalization and assumes Alice might do drugs as well. However, if Alice anticipates Bob’s behavior, and decides not to post anything on social media, who gains and who loses? Would the world be better-off if Bob couldn’t spy on Alice? Would Alice lose if she couldn’t speak her mind? According to Ole Jann’s research, the world would lose as much as Alice if she didn’t speak her mind. Moreover, society also loses to some extent, as it cannot benefit from Alice’s voice. Now, we can safely say that there is a correlation between people who are pro legalization and those that use drugs, but we cannot observe whether a person that is positive about drug legalization belongs to the group of drug users or not.

What can we learn from this? Ole proved, with his theoretical models, that it is rational to care about our privacy and it also makes sense to care about society’s approach to privacy. On the other hand, privacy can, under certain circumstances, make everyone better off. He also contributed to the presentation with another example of credit scoring companies that calculate our repayment probability for banks. Our credit scoring points are based on information we provide on social media such as music preference and education level. Therefore, if you enjoy rap music and you are a high school graduate, the bank will most likely not lend you any money.

Research findings or not, what are our sentiments on this? Does it feel fair at all to us? And if we decide not to share anything about ourselves on social media platforms, does that not already sound pretty informative?

Another guest of the Talking Economics! series, Christian Ochsner, looks at critical junctures in history and detects how they matter today. He calls himself a storyteller as a major part of his research reminds us of a story. The Nobel Laureate William Faulkner used to say “The past is never dead. It’s not even past.” In his study “Mobilizing History”, Christian shows that this quote also holds true for radical political voting.

Historical narratives and historical analogies of the world’s political leaders have become a sort of commercial slogan over the years. “Make America great again” by Donald Trump or “Take back control” by Nigel Farage are quotes that have been embedded into our minds like the ditties of our favorite candy brands. Unfortunately, when it comes to politics, seemingly innocent words of politicians can cause a lot more harm.

Christian’s work proves that political campaigns that use stereotypes help to gain vote shares and shape outgroup sentiments. “Some municipalities in the east of Austria were pillaged by Turkish troops during the sieges of Vienna in the 16th and 17th centuries, whereas others were not. Anti-Turkish and anti-Muslim political campaigns of a xenophobic right-wing party after 2005, the Freedom Party of Austria (FPÖ), were mostly effective in the pillaged areas,” he starts explaining. What this political party did was it used divisive narratives that linked present-day stereotypes about the Turks and Muslims with Turkish atrocities during the sieges of Vienna some 300 to 500 years ago.

What we learn in the end from Christian is that the arguably irrelevant past helps to shape one’s opinions, and as a consequence, 1 out of 10 votes for the far-right occur due to so-called “activated history”. By contrast, the results did not show any differences between the pillaged and non-pillaged areas before the campaigns. Historical narratives are thus a powerful tool to convince people, and trigger sentiments and voting decisions. The study shows that the long-gone past can be awakened and affects people’s decisions from time to time, but not permanently.

As the first lecture of the Talking Economics! series took place on Valentine’s Day, we wanted to know whether it was love at first sight for Christian with economics: “Economics and I was not a love story. Questions like Why can many farmers in Europe only survive with subsidies? or How is it possible that India has a shortage of doctors, while many Indian trained doctors work in the US? triggered my interest in economics. On the one hand, studying economics provides a toolkit to get some answers to these questions, but on the other hand, economics is much more than abstract models and math. Economists learn concepts that can be used to answer questions on human behavior, political outcomes and historical occurrences. Over the last few decades, economics became a kind of ‘extracurricular studies’, in particular when working with data. It is thus very open-minded today and gives young researchers a lot of opportunities to elaborate on interesting and fundamental questions, and that is what I love.”