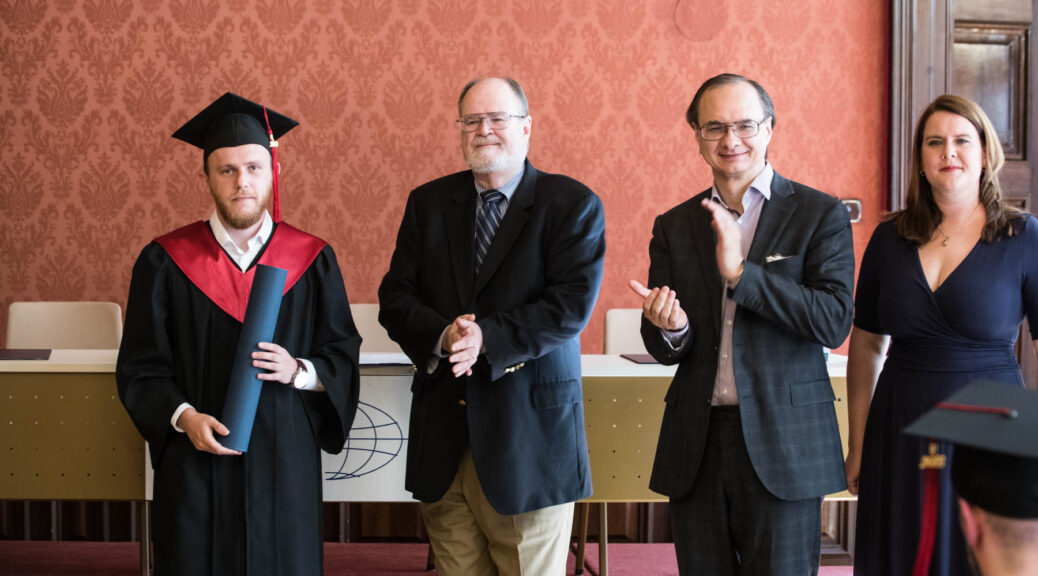 Igor Knež had been working at the Croatian Bureau of Statistics for five years when he decided to send his application for CERGE-EI´s Master in Applied Economics program. After one year of hard work, he left Prague in July 2019 with a new diploma, new skills and new knowledge, and plans for his future, but also with a feeling that he had became part of a big family.

“I was searching for a program where I could deepen my knowledge in Economics but also acquire practical knowledge in the field of data science. I realized that I had come to the point in my career where my current level of academic knowledge was not enough,” explained Igor about his motivation for thinking of some further education. One of his colleagues suggested investigating CERGE-EI’s program.

“I was surrounded with all this data that could be used for economic research and policy making but I did not have enough formal knowledge to do that properly. After reading the curriculum for the MAE program, I realized that it was an ideal solution, as I would acquire the analytical and theoretical knowledge needed for addressing the economic challenges that my country is facing. I was not wrong, it was a good decision to apply and I am lucky and grateful that I was accepted,” he continued.

Igor received the MAE program’s Public Service Fellowship (PSF), intended to encourage students from the program to seek public service employment in their countries of origin. In addition to receiving a tuition deferment schedule, students also get additional mentoring from MAE and PhD alumni who work in the public sector.

“My plans are to work in public office for the next few years in Croatia,” said Igor about his intentions for the near future. “I mainly work on sector accounts, the pension system and government finance statistics. The job itself consists of analyzing and calculating various macroeconomic variables that are used in the design of macroeconomic policies. The biggest pro of the job is that I have an insight into various data on the economic performance of our country. I find it important because numbers can be really revealing, especially if you live in a country that has been having problems with mismanagement since its creation,” he described.

The new skills Igor developed during his studies at CERGE-EI motived him to think about the next steps in his professional life.
“I would like to transfer to one of the EU institutions or international institutions that do research and work in the field of economics. I am already using the skills that I learnt at CERGE-EI but for now only for data analysis and research. Hopefully some day I will use them for policy propositions as well,” described Igor of his plans for the future.

Looking back at time he spent in Prague, Igor values the high quality of the program curriculum but not only that: “I met many interesting and smart people. I learned a lot, and in the process developed as a person and professional. The thing that surprised me the most was the openness and kindness of all the staff, from professors and TA’s to administration. This is something that I rarely experienced in my previous studies,” he recalled.

“The study group is small, therefore you have a really relaxed and cozy atmosphere in classes. You can ask many questions and thus learn even more in the process. CERGE-EI is a great institution, like some kind of a big family. I am glad that I became part of it. The faculty itself is situated in a beautiful old palace in the center of the city so after classes you can go for a walk in the city or to the riverside. What can I say about Prague? It is a magical city where I spent a wonderful year of my life. It is well organized, safe, and very multicultural. I met some remarkable people that became my friends for life,” Igor concluded.