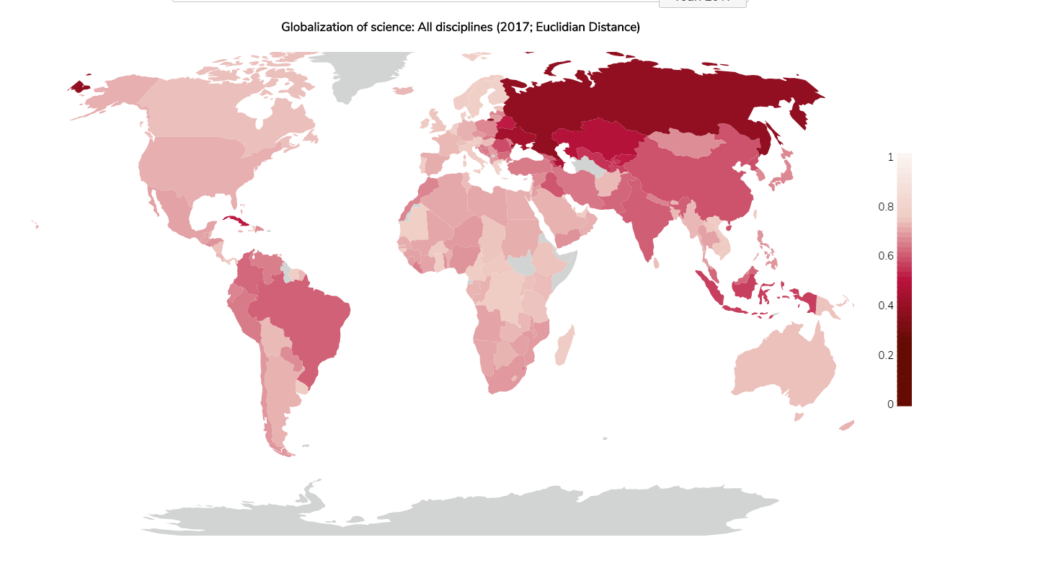 Science knows no borders—or does it? IDEA researchers Martin Srholec and Vít Macháček have conducted a study that sheds some light on this rather philosophical question. By combining data from 174 countries, 27 disciplines and 13 years, Macháček and Srholec showed how Chinese science has entered the global research arena and the lasting effect the so-called Iron Curtain has had on research in certain countries.

“As social scientists, we felt that Czech researchers lack communication with the rest of the world. We were interested in whether this intuition is rooted in hard data,” described Vít Macháček the primary motivation of the study. The data Macháček and Srholec collected showed their feeling was right.

In the introduction to your study you claim: “Science knows no limits or borders”, but one of the key findings you presented, that was also mentioned in the article published by the Nature Index, is that in Russia and some other former members of the Soviet bloc science continues to be relatively isolated from the rest of the world. So it seems that some borders remain, doesn’t it?

Exactly, that’s the point! More importantly, these borders are more evident in certain regions than in others. Researchers in post-communist countries publish much more frequently within their local communities than researchers for example in Western Europe, who publish in journals together with researchers from around the world.

You also claim that the results of your study should be of interest not only to academics, but also to policymakers and to a broader audience across the globe. Why? Why should policymakers care about such a thing?

Scientific communication with the outside world is vital for sustaining research excellence. The globalization of science that is pervasively lower than in similar countries should be a cause for concern, as it suggests that the science system has gone astray and needs an overhaul of its evaluation and funding framework.

Could you explain what exactly do you mean by “the globalization of science”?

The globalization of science is the degree to which researchers from a particular country and discipline publish in journals that are contributed to by their peers around the world.

The lower the globalization the more often researchers publish in local journals – journals that are contributed by researchers from a narrow group of countries, or even just one.

Is this topic covered by some other studies and what are the conclusions? Are there any questions or phenomena in this field that remain unanswered/undescribed and you would be interested in knowing the answer to?

Our methodology is based on several papers from the end of the 1990s (see Zitt and Bassecoulard 1998, 1999). The basic idea is not really new, but the topic was rather neglected for 20 years, and the global scientific landscape has changed dramatically since then.

Is there any research field that simply cannot get global and must remain local?

Sure there is! One cannot expect researchers working in Czech to originate from around the world, especially in the humanities where this can happen pretty often.

On the other hand, we developed our methodology to enable comparisons between countries within a single discipline. If in a certain discipline the researchers from one country publish significantly less globally than in another country we should start asking the relevant stakeholders: Are you aware of this? Why is it so?

Anti-globalization criticism is also based on the idea that globalization means unification and that it destroys diversity, and we will all end up listening to the same music, eating the same Big Mac and drinking the same Coca Cola. Do you see any negative effects of globalization in science?

We believe in the exact opposite! Lively scientific discussion requires a constant inflow of ideas, comments and criticism from abroad. Without it research outcomes could become repetitive.

One risk of the globalization of science worth considering, especially in social sciences, is that too much emphasis on global topics could lead to a lack of attention to local topics. However, we believe that such a dichotomy is rather artificial. Most “locally relevant” topics are also relevant for other communities elsewhere. The researchers’ task is to identify the core that is general and relevant to the global community and then present these results to the rest of the world.

Read Vít Macháček’s comments on the key findings of the study:

Let the data speak. In countries west of the Iron Curtain globalization is high, regardless of the discipline. The so-called national journals played a very important role In France, Germany and Italy up to the 1980s. However, since then the role of national journals has decreased.

Since 2005 Chinese science has grown rapidly, both in terms of size and international reach. China used to be the least globalized country in the world. If the trend continues, China could catch up with advanced countries by 2025 in most disciplines.

Although China is a very specific environment, this case clearly shows that where there is a will to integrate your research more deeply into global research, there is a way.

That is the primary motivation for our research. As social scientists, we felt that Czech researchers lack communication with the rest of the world. We were interested in whether this intuition is rooted in hard data, and we found that it is.

For sure this a characteristic of post-communist research systems. Whether this is desirable or not is a political decision and subject to personal interpretation. We don’t consider it very efficient, due to the reasons described above.