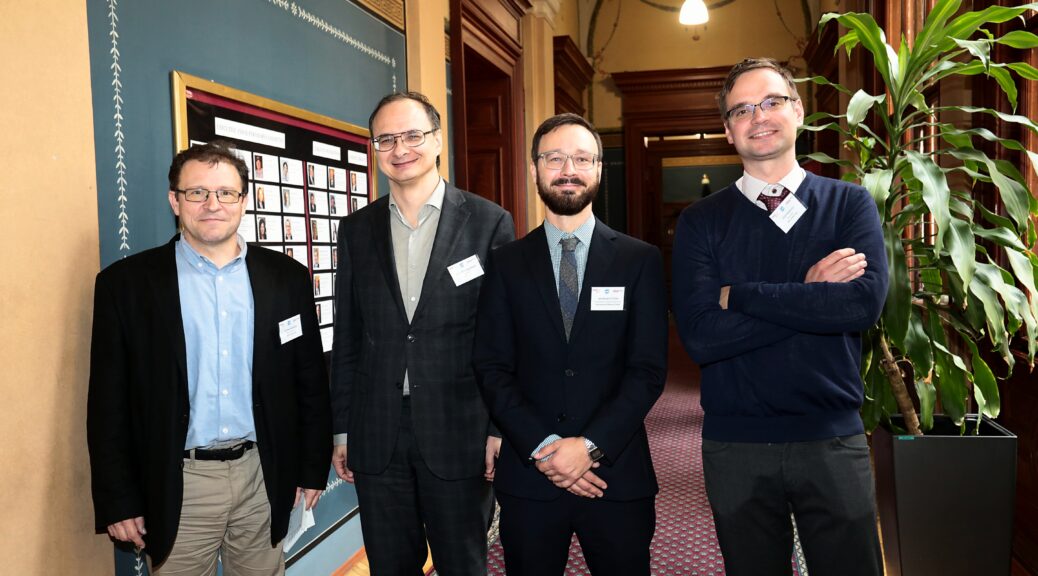 The latest public lecture to take place at CERGE-EI was presented by Andreas Tudyka of the International Monetary Fund (IMF) European Division. The topic of the report was to take a detailed look at the impact of aging populations in Central, Eastern and South Eastern European (CESEE) countries on the fiscal implications for health and pensions. Filip Pertold and Daniel Münich from the IDEA Think Tank at CERGE-EI gave the local feedback.

The projected population development in the region in the next 30 years is of significant decline of up to 15% and the reasons for this were presented. The statistics for expected birth rates are similar to those of Western Europe. However, mortality rates are higher, which will result in decreasing net populations. Migration is another factor in the mix with high numbers of people expected to leave this region for higher salaries elsewhere.

Policy reforms are suggested by the IMF to compensate for the drop in labor force participation, which primarily focus on engaging more women and older workers (55+). However, it appears that these reforms will have different impacts in different countries, in some cases completely compensating for the drop in labor force, but in others there would only be a minor impact. Despite engaging more people in the workforce, productivity is expected to drop, as a result of empirical evidence suggesting that the productivity of older workers declines, although Tudyka highlighted a caveat that these are observations from the past and do not necessarily have to remain true in the future if, for example, health levels increase.

Improving education and training was suggested as being another step that can help mitigate some of the problems ahead.

It is expected that the proposed reforms would partially offset the projected drop in GDP and increase in pension costs. Another suggested reform is to raise taxes in order to avoid explosive borrowing by governments.

Following from Tudyka’s talk, Filip Pertold and Daniel Munich from the IDEA Think Tank gave the local feedback. Filip Pertold took the lead and covered the main points starting with the fact that employment levels in the Czech Republic have been steadily increasing over the last 20 years through increased immigration, more women joining the workforce and an increasing retirement age. However, the negative side of this is that this situation is not sustainable in the long run and will sooner or later change, although the government does not consider it an important issue and refuses to consider the long-term situation.

Another issue discussed was the workforce participation of mothers. At the moment this number is relatively low compared to other countries and reforms are suggested by IDEA to incentivize mothers to return to work sooner than at present, although, once again, the Czech government is currently not considering this option. Daniel Munich added to Filip Pertold’s comments that based on a recent IDEA study, an increase in the quality of teaching is another route that can have a positive impact on the future growth of GDP, echoing comments made by Andreas Tudyka.

“The burden of pensions and an aging population will be felt by today’s youngest generations. We would make it much easier for them if we invested more into their education,” said Daniel Münich.

In conclusion, it is clear that the whole region is facing a range of challenges based on demographic changes, although each country will be variably impacted by individual factors. The consensus of today’s presenters was that these factors need to be dealt with soon by policy makers if we are to avoid negative consequences down the road.

Filip Pertold suggested that we should aim to find a common language with policy makers and the general public so that our findings will also be reflected by politicians and their objectives. Only politicians can make decisions that may mitigate the future impact of aging on society and the economy.

Working Beyond Pensionable Age: Institutional Incentives in the Czech Republic

Working Beyond Pensionable Age: Institutional Incentives in the Czech Republic

A Comparative Study of Retirement Age in the Czech Republic

The full list of IDEA Think Tank studies may be found here.