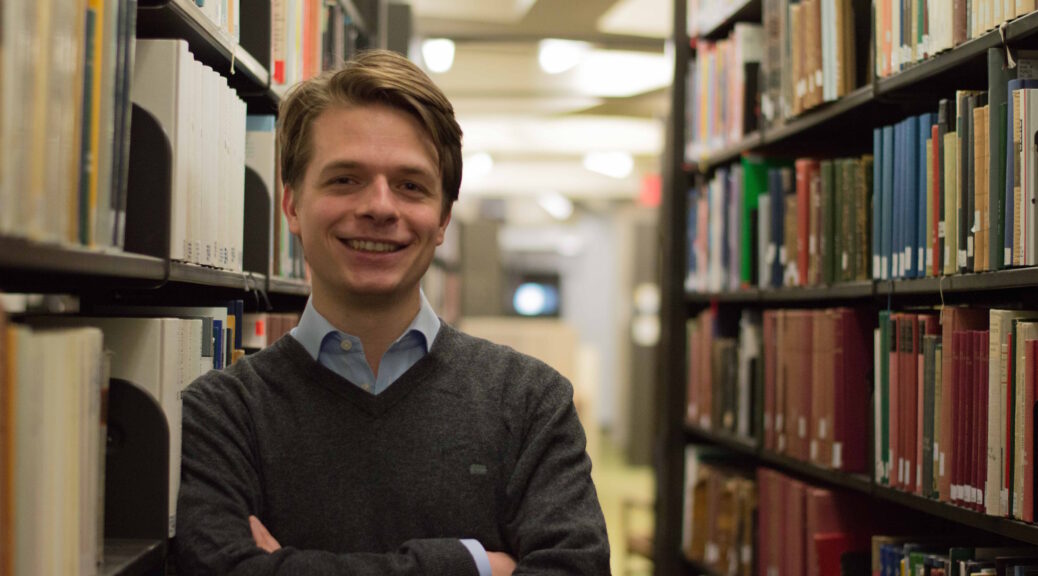 How often do you go jogging, who are your friends, and where do you work? Would you answer these questions if asked by a complete stranger? Do you have this type of information on your Facebook, Instagram or any other social network? Ole Jann, who has recently joined the CERGE-EI faculty, spoke with us about his research on internet privacy and the economic implications of the fact that people are sharing more and more information about themselves online. Ole also told us a bit about his experiences with U.S politics, exciting discoveries in Economics, and his Primus Grant Project.

Your research focuses on privacy on the internet – could you describe the connection between people’s privacy and Economics?

Could you give us some examples?

In the US, what kind of health insurance you can get depends on what the health insurance company knows about you. And that is information they might get from your Facebook profile or from your activity on Instagram. The advertisements that you get shown, the prices you get when you buy something on the internet, all these things really depend on the information that you have revealed on the internet. And on top of that, we are moving towards people providing more and more information and companies getting better and better at using that information. So, for example, Facebook already owns a patent on turning the data they have about you into a credit score.

For example, they know from your profile that you have these kinds of friends, you listen to this kind of music and you have this kind of job. Also, maybe you post many pictures of yourself jogging. And all this can be turned into a score that shows how likely you are to repay a loan if they give you one.

Because people who jog more often are on average more reliable, they are healthier, they are on average in higher qualified jobs. If we know through some social network where you work, who you are friends with and much more….all of this information is very useful to companies and has high economic value. And who gets to have that information and who gets to share that information and who gets to sell the information to whom is an inherently economic question. It also influences the well-being of billions of people the world over, whether, for example, Facebook is allowed to take all the data they have about you reaching all the way back to when you signed up.
A lot of young people today signed up to Facebook when they were 12 or younger, so Facebook has a lot of information about them from when they were still teenagers–should they be allowed to sell that, because it has high economic value? These are inherently economic questions and looking at them as an economist can give us helpful ideas about how to think about regulating that sector.

In one of my papers, my co-author and I argue that if we allow, for example, Facebook to sell this kind of data, everybody is worse-off. These problems are often thought about in terms of who wins or loses:  some people are better off, some people are worse of, one company gains money, another company loses money. But we can show that under some circumstances, if we allow companies to sell information, everybody loses, including that company because there are lots of interlinked economic effects such that in the end nobody actually gains from this transaction. That also means that ethically it is not a very complicated question. Because if we can make rules that make everybody better off—everybody weakly better off, as we say in economics, meaning that some people are better off and nobody is worse off–well, we usually want to make rules like that. If there are trade-offs—that means that some rule will make some people better off and some people worse off— what we want in the end, that is an ethical question. But understanding what the impact of the rule is, that is, first of all, an economic question because we cannot really use ethics before we understand what the impact of the rule will be on different kinds of people.

So how do you proceed in your research? Does it also include experiments or is it just theory?

Given that I have lived in several countries I also have the experience that people in different countries think very differently about problems of privacy. For example, in Denmark people are very open, people have no problem at all with the government knowing everything about them and the government collecting all kinds of data, private companies having all kinds of data, whereas in Germany, people are a lot more careful and in the Czech Republic people are to some degree more careful. And understanding that would be very helpful for thinking about how we should make rules about privacy and how companies should deal with privacy, how data should be bought and sold and saved and things like that.

You also did some research for the L.A. Times. What was it about?

I was already studying economics at that time and one summer I worked for the Los Angeles Times, one of America’s largest newspapers. This was 2008 when Obama was running against McCain in the presidential election. I was a research intern so the job was mainly to do research for newspaper articles. In the USA campaign finance is especially important.  I went to Denver for the Democratic convention where Obama was nominated, then to Minneapolis where McCain was nominated and I provided research for several stories in the L.A. Times. These were stories about where Joe Biden´s campaign money came from, how his sons were in and out of employment with lobbyists and also about Sarah Palin and her background.

Later on, you moved even closer to politics and worked for one of the German MPs. Did you like the fact that the results of your work got on the table of a politician and might have had a direct effect on real policies?

That is something that you get to experience much more if you actually work in politics or in public service—if you are a researcher, you will always be several degrees removed from actual decisions. Either you are just writing for other researchers or even if policy makers listen to you, you are still much more removed than someone who works for policy makers and prepares decisions for them.

Do you see any connection between these experiences with journalism and politics and your current work?

I think there are two connections. First, my work is relatively applied by the standards of economic theory and it is still quite oriented towards in the end being useful for policy makers.

Secondly, I also think that my work in politics has to some degree shown me that policy and politics are often more complicated and more complex than a lot of economists believe. And also that the problems that politics tries to solve are much more complicated than they might often appear. That, I think, has made me more skeptical towards some of the work being done under the headline of political economics.

I believe people can imagine scientists being excited about discovering a new planet or medicine, but is there anything like that in Economics?

But in Economics, there are still very basic questions—What exactly is money? Why does money have the value that it has and not some other value? What is inflation? Why exactly do we have financial crises? How does the economic cycle work?—and things like that. These are things we don’t understand very well. There are a lot of people who have done a lot of excellent research on this. A lot of people who understand this better than the average person, but we don’t understand it perfectly. Even highly specialized, highly educated economists don’t fully understand many aspects of these questions.

For me personally, it is really about seeing the world with new eyes that is the most exciting thing about doing economic theory. If you work with data the most exciting thing might be finding some surprising relationships in the real world.  But as a theorist, I think the best thing that you can achieve in our work is looking at something people think they understand and saying: well, actually, it might make sense to think about it in a different way.

In the example I gave about the work I’ve done, people think they understand that privacy always involves trade-offs and makes some people better off and some people worse off, but I might say: No, actually, if you think about it carefully, there are some situations where privacy makes everybody better-off.

Or take my work on echo chambers. “Echo chambers” are the idea that for example on Facebook you only meet people that already like you, or already think like you and you already have the same opinion.

Many people have an instinctive reaction and think that that is bad for society and that that is something we should fight in some way or outlaw. What I argue in my work, together with my co-author, is that, actually, that can be a good thing because—that is the classical economic argument—you need to consider what the alternative would be. So if we didn’t allow people to talk to others like them on the internet, would that really improve communication or would it just make everybody unhappy and no one communicates any better?

What brought you to CERGE-EI?

When I was here for my visit, my impression was, and that is still my impression, that the research environment is very vibrant. It is a very collegial research environment, very well connected internationally, and it is also an interesting location, as it is not as settled in a way as some other universities are. I mean, of course, Charles University is hundreds of years old, but CERGE-EI is not that old, not that settled and is still evolving.  Also, CERGE-EI has a clear mission, it was founded with a mission that it is still carrying on. I find all these things very interesting and very exciting and that was why in the end I decided to come here.

Your project “Information Revelation and Privacy in the Information Age” was chosen by the Charles University Primus Research Project, what does it mean for you and CERGE-EI?

The Primus grant is a great way to continue my work on privacy and information, especially when it comes to the internet and the information society in general in the coming years. I have several projects that are ongoing and the Primus grant will allow me to invite leading researchers in the field to Prague to work with me. For me, it means I will be able to go to conferences, visit other colleagues and talk with them about what is going on in research internationally. It will also allow me to support the very good PhD students that we have here at CERGE-EI, and to do some economic experiments on questions of privacy and questions of information revelation. It is almost like having our own little research center which allows us to become visible in this field, to be well connected and to advance projects in this field.