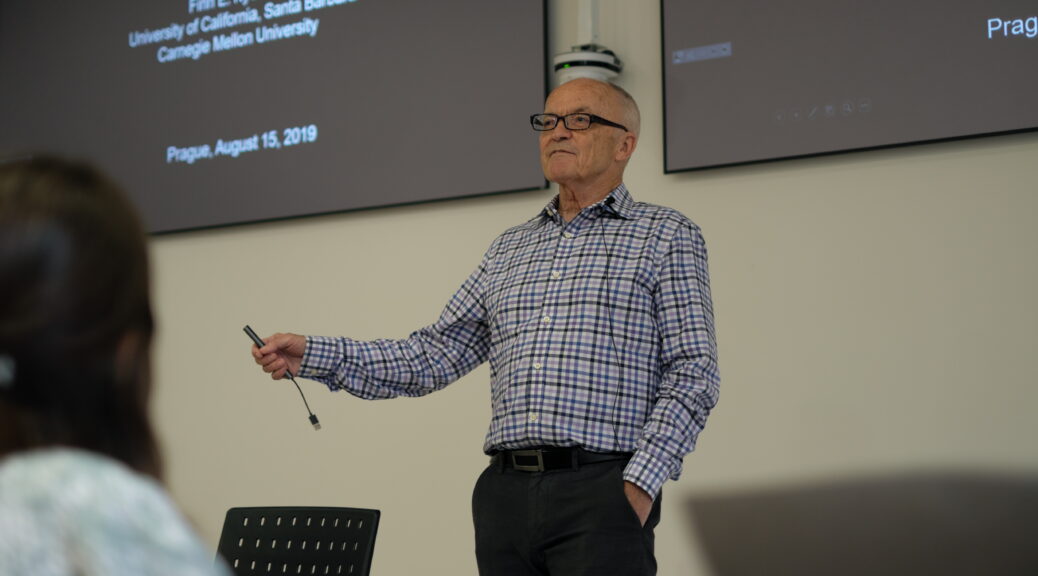 In August, Carlos Zarazaga (Federal Reserve Bank of Dallas) and Nobel Laureate Finn Kydland (UC Santa Barbara) came to CERGE-EI to meet with our Faculty member Marek Kapička and finish their paper on Argentina’s “Missing Capital Puzzle”. While being interviewed about their research, Carlos called Marek and Finn the best team of people he had ever worked with. It is not hard to believe what he said, as the three colleagues were finishing each other’s sentences and joking throughout almost the whole interview.

Trying to remember when their joint work started was not an easy job for the trio: “I don´t know where to start. I was Faculty at Santa Barbara, Finn was at Santa Barbara and Carlos had visited. It’s a long time ago,” Marek recalled. “Was it 2011? Or maybe 2009,” Carlos stepped in. “And Carlos and Finn had been working on related issues. They had a paper in The Review of Economic Dynamics on the lost decade in Argentina. Maybe Carlos could say more about it,” Marek continued.

Carlos then explained how in early 2000 there was a broader project focusing on economic depression and he was asked to join as Argentina was among the countries that were included in the study. That was when his collaboration with Finn Kydland started. “In our paper, it was very clear that despite favorable conditions both on the international market and the domestic market, Argentina was not investing as much as it should. I have some charts and you can see that the model we had predicted on the capital stock should work like this (shows the curve) and it was almost flat. So, we conjectured that it was because of the lack of credibility problem. But of course it was just a conjecture and we wanted to formally prove it,” explained Carlos. 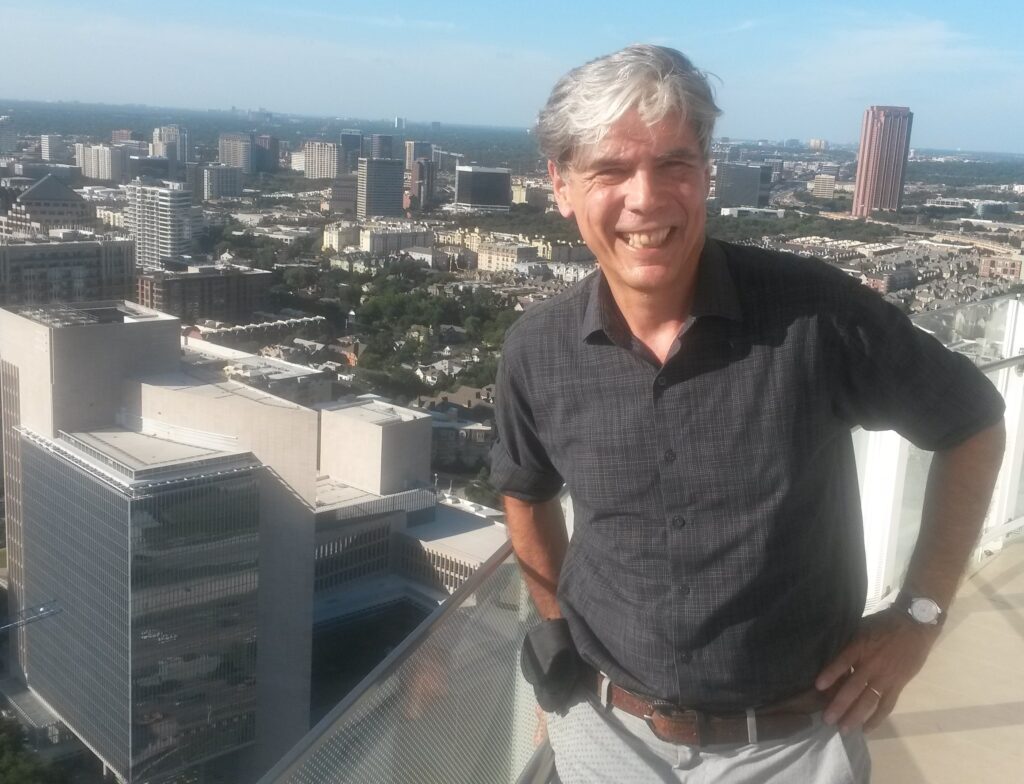 It was a couple of years later when they all met at UC Santa Barbara. “We worked with Finn and agreed on finally going to the next stage of the project and showing formally the lack of credibility which involves basically a model where we have imposed certain equations,” continued Carlos. “So, basically we are talking about modeling that, and that is when Marek got involved,” he said.

It took a while before the first results came in as all three were busy with other projects. “We had very preliminary findings, well, not even findings, but calculations, like two years ago,” Marek noted. “And finally we decided it’s taking too long, we have to finish this project, so Marek came to Dallas in May,” Carlos continued. “It was three trips, first Santa Barbara, then we were in Dallas and now here,” Finn finished.

Asked if the meeting in Prague might be the final one for this paper Marek seemed optimistic. “I think we’ll finish it and send it to the journal in fall. Maybe in a couple of weeks,” he said. Carlos agreed with a nod, noting that the deadline for submitting the paper is approaching. “Or a couple of months,” laughed Finn as the most experienced of the three researchers.

Chasing deadlines is not the only struggle while working on a paper. “The problem is that the data for Argentina we need are not reliable,” Carlos explained. “You go to the national statistics office and they tell you: don’t trust the data between 2008 and 2014,” he continued. “I remember that we needed some data that were not available, so you went to this person who told you to go to some other guy,” noted Finn. Surprisingly, working with a Nobel Laureate does not circumnavigate such difficulties. “Nah, it doesn’t help. It’s more about who I know,” said Carlos with laughter.

“For me, it’s a kind of optimistic project, you know, because in the Czech Republic, we always complain how bad things are,” noted Marek and Finn started to chuckle. “But then I look at Argentina and I see, you know, we’re not that bad,” Marek continued. 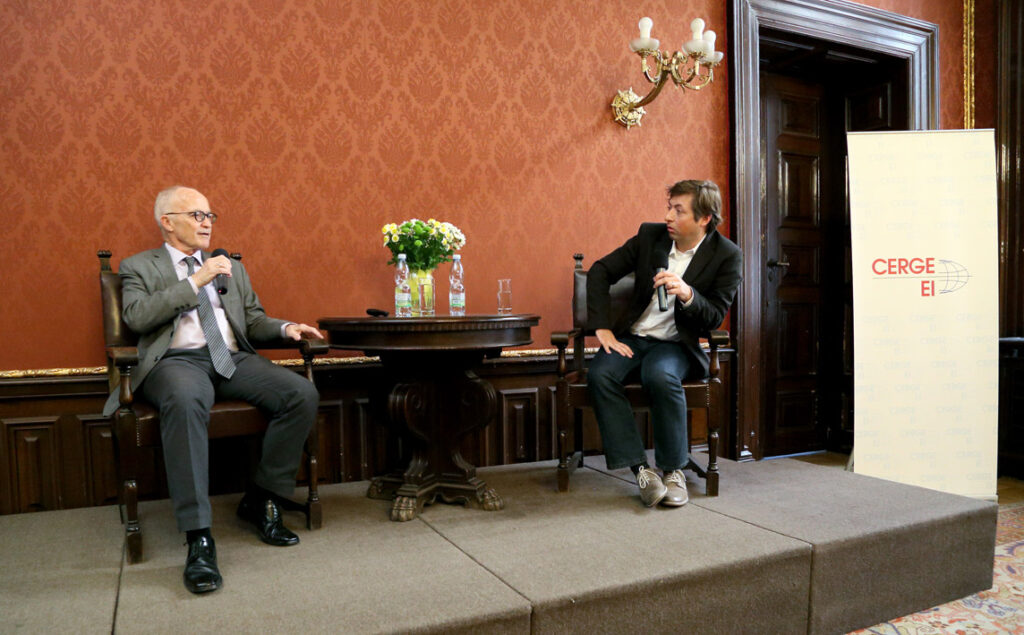 “Well, what’s the GDP per capita in the Czech Republic?” Finn was wondering. Asked about the importance of this indicator when thinking about a certain country, Finn admitted there are other things to observe. “Well, it’s not crucial, but it is some indication. But of course, we know there’s more to welfare than GDP or national income. For example, in countries such as Spain, people have way more fun than is indicated by their GDP,” he explained.  “And so do the Czechs,” noted Carlos pointing at the glass of beer in front of Finn and all three laughed again. “Well, Spain is my favorite country in the world, so it would be hard to beat Spain, but you are right underneath,” Finn reacted.

But jokes apart – they have all agreed that missing data is a tricky problem to solve. “This is my data, so it’s a question of how much will people be willing to believe what we constructed. So the important part of our project is checking whether we found some papers with the data we are using, that are telling the same story,” described Carlos. “And the story is that Argentina is in big trouble right now,” he concluded.

Together with Finn they explained how the decades of the constant undermining of credibility has had an impact on the whole of society. “Once you lose credibility, in order to regain it, you have to go for a long period of being well behaved and that is very hard to do. It’s very hard to convince people to go through ten years of pain in order to have a better future for their children,” said Carlos comparing the situation in Argentina to countries like Afghanistan and Somalia.

The aim of the paper is not to offer a solution. “It’s more like pointing out very clearly what went wrong, highlighting the mechanisms,” Marek described. Carlos continued on a serious note with rather pessimistic predictions for his country, highlighting that almost one-fifth of children do not finish high school.

The reaction from Marek involved joking again. “It always surprises me because Argentina has so many good economists.” “Yes, that is amazing, ” Finn confirmed thoughtfully. “But they’re all abroad,” replied Carlos with laughter.  “I’m pessimistic because I’m kind of seeing Argentina going down, down, down. But I’m not that pessimistic to the point that I do not want to write that paper,” he added shortly after being called the most pessimistic person by Finn.

Good vibes among the three researchers are obvious as they all reported having no serious arguments while working together. “Maybe we’ll get emotional once we get the referee report,” noted Marek. “Seriously, it is nice with Marek and Finn. It’s the best team of people I have ever worked with,” was Carlos’ closing note.