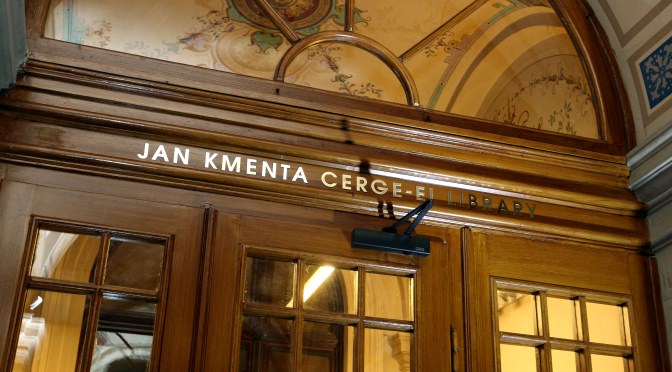 On November 19th, 2016, the CERGE-EI community paid tribute to one of the most influential economists and researchers of Czech origin, Professor Jan Kmenta, who passed away on July 24th, 2016, in Prague. Among his many titles and honors, Prof. Kmenta was Professor Emeritus of Economics and Statistics at the University of Michigan, a CERGE-EI Visiting Professor, and a member of the CERGE-EI Executive and Supervisory Committee.

The evening began with a welcome speech by Prof. Jan Švejnar (Chairman of the Executive and Supervisory Committee of CERGE-EI) in the foyer of CERGE-EI. This was especially fitting because the library located there has been renamed in honor of Prof. Kmenta. After his speech, Jan Švejnar introduced speakers who wished to say a few words to honor Prof. Kmenta. The audience heard speeches reminiscing about Prof. Kmenta´s lifetime achievements and contributions to economic research, to CERGE-EI, and his tireless individual student mentoring. Among the speakers were many of his colleagues and friends, including Prof. Randall Filer (CERGE-EI Foundation), Prof. Henry Farber (Princeton University), Prof. Peter Neary (University of Oxford), Doc. Krešimir Žigić (CERGE-EI), Olga Popova, Ph.D. (CERGE-EI Alumna), Doc. Daniel Münich (CERGE-EI), and Prof.Kmenta´s wife Barbara (Baci) and his son, Steven.

The highlight of the evening was the formal unveiling of the sign with the new name of the library, “Jan Kmenta CERGE-EI Library.”. The renaming of the library is a testimony to the institution’s respect for the lifetime work of Jan Kmenta and for his contributions not only to CERGE-EI but to the whole field of economic research.

The evening program continued on the second floor, where a dinner reception was prepared for all guests. The reception was primarily an opportunity for those present to reminisce about Prof. Kmenta as an important economist, friend, and member of the CERGE-EI community. Through the evening, guests were invited to write short notes about Prof. Kmenta in a memorial book, which will be displayed in the Jan Kmenta CERGE-EI Library.

The evening was a dignified and pleasant farewell to our respected researcher, friend, and community and family member.

For more information on Professor Jan Kmenta, see this blog post. To see pictures from the event, see the album on Flickr.