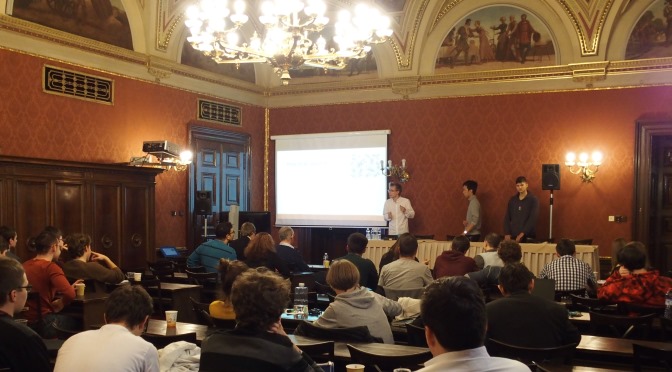 On Monday 12th December 2016 we saw the Economics Projects for High School Students come to an end after students spent 12 weeks learning the basics of Economics and undertaking research using real life data, with support from their allocated supervisors.  The project received 60 applicants which were filtered down to 24 participants who came from 11 different schools; 8 in Prague and 3 from other regions in the country.

During the former part of the project, the students received six lectures from Sherzod Tashpulatov and Samuel Škoda. Samuel is a researcher in the IDEA think tank and he taught the Czech speaking group, while Sherzod, who is a CERGE-EI PhD alumnus and a teacher at several Czech universities, taught the English speaking group. During the lectures students gained an understanding of econometrics, statistical concepts, randomized trials, linear regression, working with data and much more. After the lectures, students conducted research in their topic areas under the supervision of their tutors – CERGE-EI’s PhD students and graduates.

The groups researched different areas of economics. Eva Hromadkova’s group researched into why teenagers smoke. Factors such as age, gender, class, were explored to understand the extent to which they influence teenage smoking. Primary research was carried out and suggestions were made on how to decrease the number of teenage smokers. Georgi’s group explored the economic strengths of the Czech Republic compared to other European countries by using secondary data and analyzing industries such as construction, agriculture and real estate. Iuliia’s group carried out secondary research  to investigate the factors that influence salaries in the Czech Republic, such as living in the capital, having a family and the type of industry worked in. Sasha’s group researched whether social distance influences prosocial behavior, and conducted first-hand primary research into two different schools to obtain data. Michal’s group explored a connection between political donations and the allocation of public procurement contracts in selected regions of the Czech Republic.

During the final presentations, the students presented their research to the other teams, faculty members and the jury consisting of Kresimir Zigic, Deputy Director for Graduate Studies at CERGE-EI, and Vilem Semerak, researcher at the IDEA think tank; they were asked questions and were given feedback on their work. All the students undertook comprehensive research and answered all questions asked by the jury and audience in a responsive way. After deliberation the jury awarded a first and joint second place to the winning teams.

Topic: ‘Why do teenagers start to smoke?’

Topic:  ‘Which factors have a major influence on salaries?’

Topic: ‘Does a contribution to a political party increase the likelihood that a firm will be awarded a public procurement contract?‘

Topic: ‘In what economic activities is the Czech economy stronger than other European economies?’

What they had to say?

This was CERGE-EI’s first time conducting a project like this and indeed no project of this kind had been undertaken before at any institute in Prague. Here’s how it helped both students and supervisors:

Tutor Iuliia Kuntsevych, M.A.: “This was a new and interesting experience not only for the high school students, but also for me as their teacher. My group was working on the labor project – correlation between wages and education – and I hope that the results they achieved will be useful to them in the future 🙂 I think that these Economics projects are a good idea, since they help participants to decide what they want to do after graduation from the program and whether they want to pursue economics.”

Student Jakub Lala: “I found the project to be interesting and rewarding. It gave me a better idea of how economics and statistics are used in real life to prove or disapprove some hypotheses on correlations. I believe I gained a key knowledge base of on how statistics work, which will greatly help in my future studies for my diploma and at university.”

Student Martin Hušek: “I found the course very motivating as regards my future interest in studying Economics. I had already been pretty keen on studying Macroeconomics before, although I had never studied “high level” Economics in terms of the application of  Mathematics and Statistics. I would highly recommend this experience, and I will miss studying at Cerge and hope that somehow we can continue with our projects.”