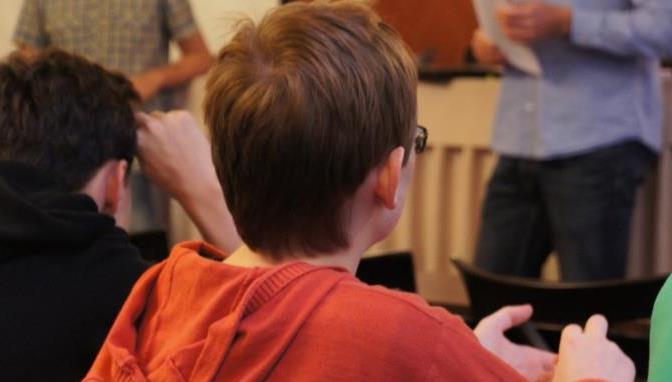 During the first nine years of its existence, Open Science focused exclusively on natural sciences, but this year it has opened up to include social sciences as well. As a result, three CERGE-EI postgraduate students/alumni agreed to become project tutors and once six high school students had signed up, the Open Science project at CERGE-EI became a reality. From January to December this year, the students have been exposed to the theory as well as practice of economics by attending both special lectures and conducting research based on real data.

To Read. And to Apply

But how does one explain the theory to someone who has never had any introduction to the science? Oleg Sidorkin, CERGE-EI PhD candidate and one of the project tutors, is convinced that economics needs to be presented to high school students in a popular form. “To get a better flavor of economics, I recommend the students start reading popular books about economics, for example Freakonomics. During my lectures I also encourage them to read economic literature and make presentations during the lectures on what they have learned,” explains Sidorkin.

Georgi Burlakov of CERGE-EI, another program tutor, is of the idea that project participants manage to understand the theoretical framework of economics without any problems provided that it is properly related to practice: “First, we covered the principles of economics – from microeconomics all the way to production theory. And then we related the theory to practice: I took my students through the basics of regression analysis and hypothesis testing. And I ever had to motivate anyone,“ says Burlakov.

Economics as a Practical Science

Both tutors, however, agree that the economics within the Open Science project is best to be presented as a practical science so that students could, among other things, learn something that is useful in life in general, for instance financial literacy, data analysis or the basics of statistics.

Daniel Mužátko, one of the high school students participating in the project, confirms this idea by saying: “The (…) things that drive me forward are firstly the fact that my research will analyze real data, and secondly that I will learn something useful, which cannot be said about most of the things I learn at my high school.“

The tutors agree that if there is a gap to be filled in the Czech high school curriculum, it certainly is the issue of the practical applicability of acquired skills.  Many subjects are still detached from real life as they are not presented by means of real life situations to which the theory can be applied.

“Economics can be useful for making independent decisions in life. It is worth studying notwithstanding the fact that one does not seek to pursue a career as an economist.   Therefore, participating in projects like Open Science and the Projects in Applied Economics for Talented Students, which is to begin at CERGE-EI in September, is for sure the right way to go for any talented high school student,” concludes Georgi Burlakov.