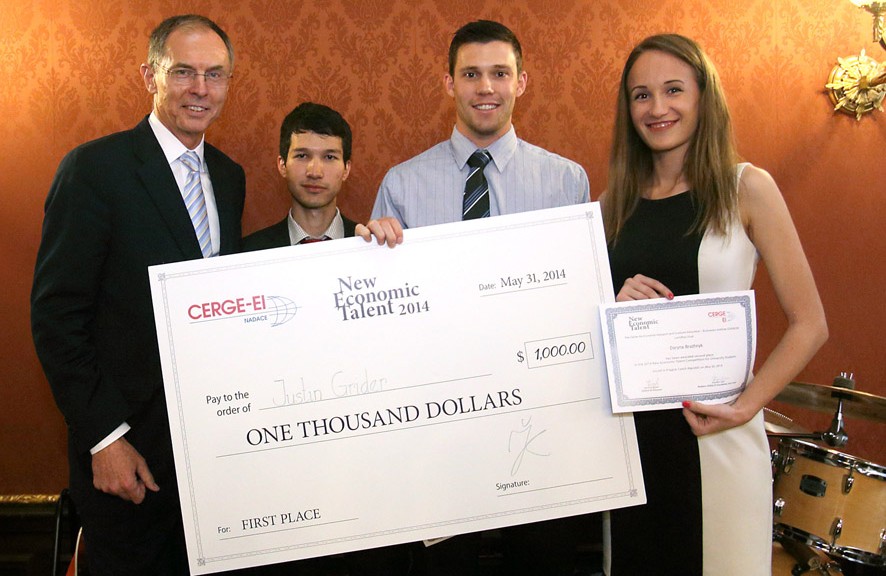 As we count down the days till The New Economic Talent 2016 deadline, we did a bit of reflecting on previous NET competitions. Last year, the top three of 138 submissions presented their thesis in Prague and a total of $1500 USD was awarded to winners. But the benefits of the competition go beyond just money and travel; we caught up with past NET finalist, Salim Turdaliev, to gain a fresh insight into the contest and his life in academia today.

Now undertaking a PhD in Economics at CERGE-EI, Salim participated in the New Economic Talent 2014 as a student from the Westminster International University in Tashkent, Uzbekistan. His bachelor’s thesis, Empirical Evidence on Labor Force Participation of Married Women: The Case of Russia, won him second place alongside Daryna Brazhnyk. This is what he has to say about his experiences:

I became interested in studying economics because….
“As a transition economy, economics is a popular field in Uzbekistan as there is a strong focus on development and economic growth. The economics program is one of the best degrees offered in Uzbekistan so I decided to go down this path.”

I wrote my paper on Female Labor Participation because…
“One of the best researchers at my home university was very interested in this issue of labor economics. After consultations I was told it is best to write a thesis using micro-data to connect households and see the implications for the macroeconomy. I found female participation to be very important, they make up roughly half of our population, yet, in many developing and especially transition economies females are under-represented in the labor market. Which I think is a very negative sign for economic growth and for overall development so I wanted to study it more.”

How I became involved in the New Economic Talent…
“I found out about the NET Competition through a professor in Uzbekistan who was a visiting researcher at CERGE-EI. Once he returned to my university he mentioned the competition to our class, as we were all working on our thesis at the time. He mentioned that the NET competition was a good way to get some feedback on our papers.

I didn’t think I was going to win something; I knew it was an international competition and everyone was applying for it. I applied anyway, thinking that the feedback will be beneficial to completing my thesis so I could still improve my grade before submitting the paper to my university. But then I found out I got into the top three, I didn’t expect it at all! I called my supervisor straight away. And after that of course I got a good grade on my thesis.”

The experience of presenting at the New Economic Talent…
“It was maybe my first time presenting something in front such a professional audience, so I was very nervous. They saw through all my research, were pointing out many problems in the study and asking a lot of tough questions, which definitely helped in improving the thesis afterwards.

In the end it added a degree of confidence to my presentation skills; afterwards I had to present the same paper at a conference in Uzbekistan. While giving this presentation I felt so much more comfortable, I was thinking, If I could present it in front of the professors at CERGE-EI, then it shouldn’t be so hard to present it here.

Presenting my paper in the competition was a very good chance for me. I saw the very high levels of academic submissions and was able to see what it’s like to study in one of the top schools in Central Europe.”

My advice for preparing a thesis…
“The crucial part is that you should be interested in what your writing. Of course there will be parts that will be harder but you will get through it if you care. If you’re not interested in your topic it could not work at all, you’re not motivated. Afterwards in two or three years you would hardly recall what you wrote about. But if you’re interested in what you’re doing then you will be much more motivated to write and produce good quality work.”

I decided to do a doctorate because…
“My career plan is to go into academia and I’ve realized that doing a doctorate is crucial for this.”

My life as a post-graduate student…
“At first it was a struggle but I got used to it over time. Naturally, I’m able to understand intuition behind economics , that is why I am more interested in behavioral, household research, because there is more intuition than mathematics.

I want to research in the behavioral and experimental field because I think there should be more emphasis on this in economics. Most economic models assume rational agents but many experiments show that humans aren’t actually so rational, there are many biases and behavioral changes, and this should be accounted for in the field.

When I came to CERGE-EI for the New Economic Talent, I was very surprised to find out that there are no undergraduate students, when I found out that it’s specifically a graduate school I got very excited. I thought that if I can get into this school it will be a big opportunity for my career development. I think for academia it is crucial to be in an environment that is highly intellectual and focused on their work. The thing is that these people in a purely graduate school have a very clear goal in mind and have a lot of experience”