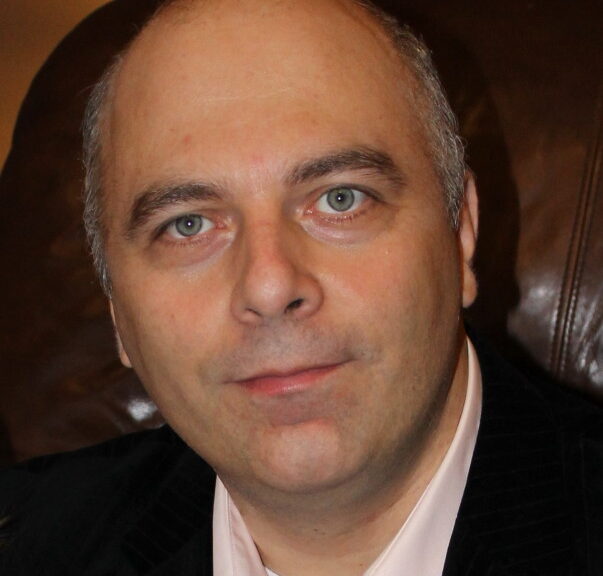 George Vachadze, our PhD graduate from 1999, has recently been appointed Full Professor at the College of Staten Island, City University of New York.  How does he remember his studies at CERGE-EI and what is he currently working on? Read his answers to these and other questions in our interview with George.

You were a very early CERGE-EI student, starting your PhD studies back in 1995. Can you share some memories?

It’s incredible how much the world has changed since then. During those times, the Soviet Union disintegrated, which was followed by growing political unrest, lawlessness, and economic hardship, especially in Eastern Europe and former Soviet republics. I experienced that hardship living in Georgia. I remember the summer evening when I learned that I had been accepted into the PhD program in economics at CERGE-EI. This news changed me and my life forever. I joined the program as a highly motivated student. I worked and studied sixteen hours per day, I had many sleepless nights, but I enjoyed it because I appreciated the opportunity to study. CERGE-EI had a GREAT IMPACT on me.

After earning your PhD at CERGE-EI in 1999, you pursued another PhD in Mathematics at the University of Wisconsin – Milwaukee. Did your CERGE-EI experience prepare you well enough for PhD studies in the US?

After graduating from CERGE-EI, I had a few job interviews and a job offer from the University of Warwick in the UK. At the same time, I received an offer to join a PhD program in mathematics at the University of Wisconsin – Milwaukee in the USA. I decided in favor of the PhD program and joined the math department as a PhD student in 1999. The main motivation behind my decision was to complete the graduate studies in mathematics which I started in Tbilisi, Georgia, before joining CERGE-EI. At age 33, I had managed to earn two doctorates, one in Economics and one in Mathematics. Of course, my studies at CERGE played an instrumental role in helping me to complete the PhD in Mathematics, because CERGE-EI gave me the experience and the preparation for doing research.

Since 2006, you have worked at the College of Staten Island, City University of New York, and you have been an Associate Professor there since 2016.  You have recently been made a Full Professor – congratulations! What made you decide on a career in academia?

After completing my studies, I spent about five years in Business. I worked at National Economic Research Associates Inc. (in New York City, NY), Vortex Trading LLC (in Chicago, IL), the Bank of Nova Scotia (in Toronto, ON), Tricycle Asset Management (Toronto, ON), and the Bank of Georgia (Tbilisi, Georgia). Through this, I realized the value of an academic environment, and I decided to go back to academia. In 2005, I joined the Bielefeld Graduate School of Economics and Management (BiGSEM) as a post-doctoral researcher to build my publication record. Within four years, I published four research papers in leading economic theory journals and prepared four manuscripts for publication. In 2009, I was hired by the College of Staten Island of the City University of New York as a tenure track Assistant Professor. In 2016, I was tenured and promoted to the level of Associate Professor in economics. In 2021, I was promoted to the rank of Full Professor of Economics.

What research projects are you currently working on?

My current research and teaching interests include (a) Finance, growth, and development, (b) Between and within-country income inequality, and (c) Financial globalization and endogenous fluctuations. One common element that unites these research areas is the concept of “symmetry breaking”, which is the key concept for understanding self-organized pattern formations. This concept has been widely applied in physics, biology, geology, and other natural sciences. For example, (a) in astronomy, we ask, “why is the matter in the universe distributed in clusters, leaving much of the universe empty?”; (b) in biology, we ask, “how did life begin in the primordial soup of amino acids and how did living organisms acquire forms through cell division and morphogenesis?”; and (c) in geology, we ask, “what explains the formation of wave patterns, jet streams, ocean currents, and continental drifts?”.

Similar questions of pattern formations exist in economics. In my research, I ask: (a) Why are there rich and poor countries? (b) Why do ex-ante homogeneous agents become heterogeneous ex-post? (c) Why are there income disparities among agents with the same skills, knowledge, and talents? (d) Why are industries clustered? and (e) Why are there booms and recessions? One commonly accepted approach to answering these questions is to introduce an exogenous source of variation, from which, for example, we can conclude that rich countries are rich because they have relatively better technology which attracts more capital. The approach I take in my research – based on the concept of symmetry breaking – does not require any exogenous source of variations because of two-way causation. In the above example, it is not only that better technology will attract more capital, but also that more capital leads to better technology (due to economies of scale). In other words, in my research, I try to explain variations of outcomes based on the internal mechanisms of the system rather than focusing solely on external sources of variation (such as the climate and geography). This research framework can help us to better understand when even a small exogenous variation can be amplified to generate a large variety of outcomes.

People. At CERGE-EI, I had opportunities to meet with great people who influenced me a lot. While working on my Ph.D. thesis, CERGE-EI funded me to visit the William Davidson Institute at the University of Michigan, where I frequently interacted with Professor Jan Svejnar and Professor Jan Kmenta. I owe them a lot! I would also like to mention my mentors at CERGE-EI, Prof. Milan Horniacek, Prof. Randall Filer, Prof. Jan Hanousek, Prof. Michal Kejak, and Prof. Krešimir Žigić, from whom I benefited enormously! A good teacher will teach you the information you need to learn the subject and to pass a class, but a great teacher will teach you things that will enrich your life in the long run. These are the people who enriched and improved my life. I will always be thankful to them for their patience, kindness, and dedication!

This year, CERGE-EI is celebrating 30 years since its founding. What do you perceive as the strongest message CERGE-EI sends?

I would like to congratulate the founders and all CERGE-EI stakeholders on this milestone! I think CERGE-EI has done a great job over the last few decades. It’s incredible to see the impact CERGE-EI makes on its graduates, and the impact CERGE-EI graduates are making worldwide. I wish ongoing success to this great institution!