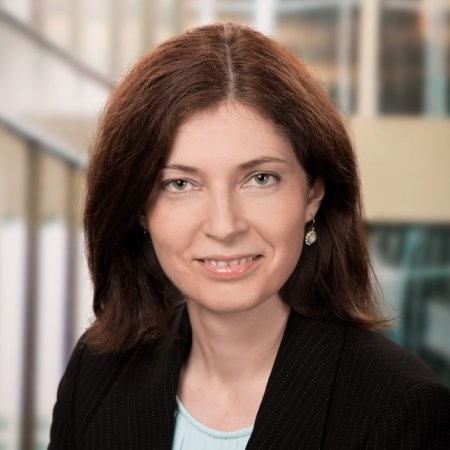 Teodora Paligorova, a Ph.D. graduate from 2007, started her career at the Bank of Canada. Four years ago, she became the Principal Economist at the Board of Governors of the Federal Reserve System in Washington, D.C. What does she see as the biggest challenges in the field of finance? And what are the three messages she has for CERGE-EI students? We are happy she shared her thoughts with us in a blog interview.

Shortly after your graduation in 2007, you started to work at the Bank of Canada, where you worked for more than 10 years. How did your CERGE-EI experience help you to get the position there?

One can never pin down the exact reason but perhaps it is not needed. Rather, I see a mix of several contributing factors. My thesis was in an area that was of interest at the Bank of Canada. At that time, the major central banks had just started adding non-traditional areas to their portfolio of expertise. With the start of the global financial crisis, this proved to be a good strategy. It was useful to have a clean empirical setup using US data to answer a relevant question. Back then, I explored the impact of the passage of a major reform that affected the governance structure in US large corporations.

Since 2018 you have been the Principal Economist at the Board of Governors of the Federal Reserve System. Can you tell us more about your work there?

I am currently working in the Division of Financial Stability at the Board of Governors in DC. The core work is to conduct research and policy on emerging systemic risks by the largest US banks. Some of the typical topics include the risk-taking incentives of large banks, the role of regulatory reforms on bank business models, and the impact of regulation, including stress testing. The Board of Governors is a fascinating place in that its policy has an immediate first-order impact. We always work on highly important and interesting questions. For example, our agenda includes questions such as the role of low-interest rates on risk-taking, especially those activities that lead to the build-up of vulnerabilities. Another very exciting area is the role of stress testing on financial intermediation and banks’ business models. During the pandemic, we participated in the launch of emergency lending facilities.

Your professional interest has been in finance since your studies – you obtained a Baccalaureate in Finance and your dissertation thesis was focused on the managerial pay structure. What do you see as the biggest challenge in the world of finance due to the current changing world?

The difference between the academic fields of economics and finance is somewhat thin.  Perhaps the most distinct field in finance is asset pricing. The rest is very close to economics. I have always been interested in studying incentives and (for profit) organizational structures. Somehow, without much planning, my dissertation area appeared to be on a crossing between labor economics and corporate finance, which was useful when I started working for the Financial Markets Department of the Bank of Canada.

My career launched in a very interesting period at the start of the global financial crisis in 2007-2009. Given that this crisis originated in the financial sector, it was crucial to understand the incentives and behaviors that made the entire system more vulnerable and exposed to systemic risk. Financial stability turned into a frontline area, to which I have also contributed. To improve the resiliency of the financial system, we had to first dissect and understand its functioning from a macroprudential standpoint. The new regulatory framework must have met, at least in part, its purposes as the global financial system has weathered the COVID-19 pandemic thanks to greater resilience. However, there are always evolving risks that pose challenges. For example, the rapid change of fintech (technology-enabled innovation in financial services) questions traditional backward-looking risk assessment. The question then is whether the current analytical tools will allow us to detect the formation of new risks.

I am extremely thankful to all CERGE-EI faculty. In one way or another, they stirred up a long-lasting passion for economics and specifically doing research. Of course, I am indebted the most to my supervisor Stepan Jurajda. His guidance and help while working on my Ph.D. thesis have left a permanent mark on my career. I will never forget his commitment to weekly meetings (and sometimes even more often) and also sharing data and resources without reservation. I rarely meet Ph.D. students from other programs who received so much face time with their supervisor(s). Having frequent discussions and tracking progress, in the beginning, makes a big difference. Randy Filer and his wife Barbara Forbes’ contribution was invaluable. They have helped me tremendously with advice, kind words, hospitality even until today.

Celebrating 30 years is a major milestone. Congratulations to all who have played a role in the success of CERGE-EI! When I was a student, CERGE-EI was a much younger institution and it was uncertain how it would develop. In many aspects, it was at a crossroads with the first ten years of doing work on transition economics coming to an end and the urgency to venture into new areas in terms of business model and academic vision. There were many moving parts that had to find their own place to see CERGE-EI to the place it is in today! Obviously, it has all worked out well. It was a very exciting time when I think about it now, and I can only be proud to have played a small part in this process.

I would highlight three messages that CERGE-EI gives to its students. First, do not be afraid of small beginnings. Indeed, pursuing doctoral studies is very rewarding but the start is usually filled with many doubts and concerns: “Will I pass all the exams? How do I find a topic? Will I manage to write the best thesis with the best supervisor? What if I do not find an academic position? Oh, it would have been easier if I was in a much more established and reputable school.” Well, CERGE-EI started with very little but has managed to achieve so much in a relatively short period (see the Krešimir Žigić  Blog interview), which leads me to my second point that it is the uncompromising striving for excellence that is key to success. It is very easy to start taking shortcuts when resources are scarce, but CERGE-EI’s path demonstrates that despite facing challenges, it has committed itself to deliver second-to-none quality both in teaching and academic research. Last but not least, CERGE-EI has always been very engaged in building a community. As a student, it is very important to be part of this community because it gives you a sense of being understood and heard by people with a similar background. Also, knowing that you can reach out to the alumni community is valuable when making career decisions. Indeed, the CERGE-EI alumni community is receptive and easy to reach!