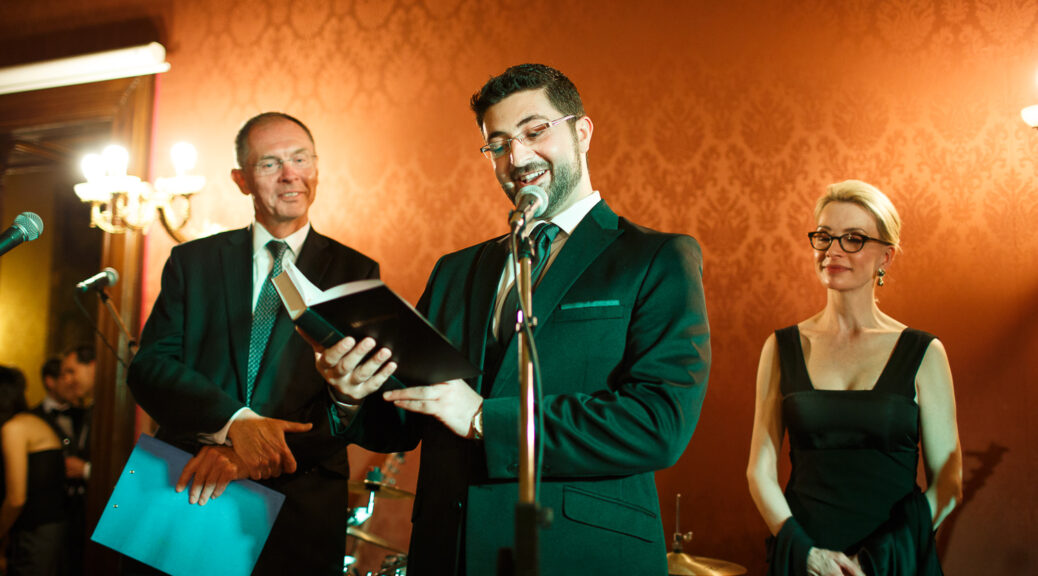 After Gurgen Aslanyan graduated from our PhD program some 6 years ago, he had the urge to give back to his own country, and took a position at the Central Bank of Armenia. Now as the President of the Armenian Economic Association, Gurgen is looking back on his journey from Armenia to CERGE-EI and back in this refreshing interview.

Imagine an historical marble staircase, two young people — of opposite genders — obviously having a great time together (judging by the smiles on their bright faces) sitting between volumes of books and having one in their hands. Caught your fancy? It did mine! For a while I was just mesmerized (and haunted) by that image that I saw on the slideshow of Richard ‘Something’ (unfortunately I forgot his last name), who was on a promotional trip in Armenia.

Apparently, the grand staircase of Schebek Palace (as I later learned), in tandem with the happy faces of those two students (whom I never got to know, as I never saw that picture again), created a postcard in my mind with a message to come and study in a place full of people thinking like you, people who like to discover, who are open and frank to themselves, who are set to do whatever they enjoy doing, who are going to understand how the economy works and how they can help people and the government — and all that in an Oxbridgesque environment. Frankly, I forgot this postcard within a day. However, months later I was doing an internship at the Ministry of Economy of Armenia, where my supervisor was preparing her papers for graduate studies. She made me believe that I wanted to apply for graduate studies myself (and then came the flashback of the postcard). Willingly, I did the paperwork and sent it off. She went to Tufts, I came to Prague.

Absolutely! All the expectations that I had was a marble staircase and lots of books. The staircase was there, the books were slightly further away in the library, and there were lots of them — something that I missed in my university that had volumes and volumes of Lenin and Stalin but not a single modern Economics text.

Meanwhile, I was slightly disappointed not to find the couple from the picture. Luckily, the building was full of people that I could easily relate to — people who became immensely dear to me over time. The people were there, the environment was there; the passion, the openness were omnipresent. It was not at all traditionalist (as I had presumed from the picture) but it was such a terribly frank place that once I thought in my mind (very loudly, perhaps people around me heard as well): well, this is so me, finally I am home.

Then came the studies. A huge volume of them. Surprisingly, I enjoyed every moment of the suffering (and I am not masochistic in any other respect). Once one of the professors said that I had to forget that I had been a big fish in my pond, as I was just a little fish in the ocean (btw, a very stupid thing to say to anyone). I never told him that I actually felt like a tiny microbe under the scale of that little fish which was going deeper into the darkness of the ocean depths.

Not long after I realized: the sun is shining. I am growing (like a mushroom after the rain). I am in the process of deep learning. I am generating systematic, rigorous knowledge. Everything makes a lot of sense. I am surrounded by great people. I am having the life of that postcard. I’m living my dream.

I was in England when I received a call from a person I had met once before at a conference — a high-ranking official from the Central Bank of Armenia. He said they had just established a research center at the bank and they needed my help related to that. A couple of days later we were discussing whether I would be staying there for 3 or 4 months and I was insisting on the shorter period.

Once I got there I realized: this is my opportunity to give back. I gained so much from CERGE-EI that I had to share it with others. I overstayed the initially agreed four months, I overstayed for years. And for that CERGE-EI bestowed on me the inaugural alumni hero award.

I started teaching when the Graduate Teaching Fellowship was first instituted (was it 2007?) and never interrupted teaching, as it is something I tremendously enjoy. As the job at the Central Bank was mostly organizational and coordination (or it was mostly a leadership position as management people call it), I was taking various teaching positions inside Armenia and outside — getting to know the people, not losing ties with the younger generation.

At some point I realized that there was not much that I could give to the Research Center of the Central Bank any further. So I joined the American University of Armenia — a lively, modern, thriving institution that prides itself not in being the leading university in Armenia but rather in supporting the other universities in their efforts of betterment. The university was kind to honor me with the position of Assistant Professor at the Manoogian Simone College of Business and Economics, and I gladly contribute to their daily work. Furthermore, I am blessed with great colleagues with whom I not only work and collaborate but also learn and grow. I am back to the life of that postcard (just a different staircase — a modern one).

The mission of the association is to promote Economics scholarship and education in Armenia and to foster research-based policy advising — something that I sincerely relate to. So when I was informed that I would be elected to the position, I was quite glad. It allowed me to continue the tradition of organizing conferences that bring like-minded people to have frank discussions (the postcard again — this time for a couple of days only), help collecting data, make it available to international researchers, and thus contribute to the informed decision making in Armenia and other emerging economies.

The association (ArmEA) also strives to bring new talent to Economics, through working with schools, establishing special research awards for students and the like. Furthermore, females are given special importance and already last year there was a Workshop for Women in Economics. I sincerely hope that this endeavor will find its momentum and will turn into a successful project.

In wider hopes, I see the association becoming one of the driving forces of Economics not only in Armenia, but in the wider region of Eastern Europe and Western Asia. I am already trying to make ArmEA accessible to Georgians as much as Armenians (perhaps, the name does not help much) and hope that one day we will become the ‘common home’ for many economists from Palestine to Belarus, from Cyprus to Siberia (and we can all move into the postcard). Most of the trained economists in this region are usually secluded and I see ArmEA as a platform for gaining the scale effect. Surely at the moment the scale comes from the Armenian Diaspora that historically has been very large and some names are easily recognizable in the Economics profession as well, like Daron Acemoglu or the late Armen Alchian, whose demise prompted renaming the main award of the Association to honor him and his contribution to the profession.

My plans are similar to anyone in the Economics profession: research, policy-advising, and education. In other words, to live in the lovely postcard (that CERGE-EI lured me into) and to make room in that postcard for as many as are interested.

Thank you, Gurgen, we enjoyed talking with you so very much!