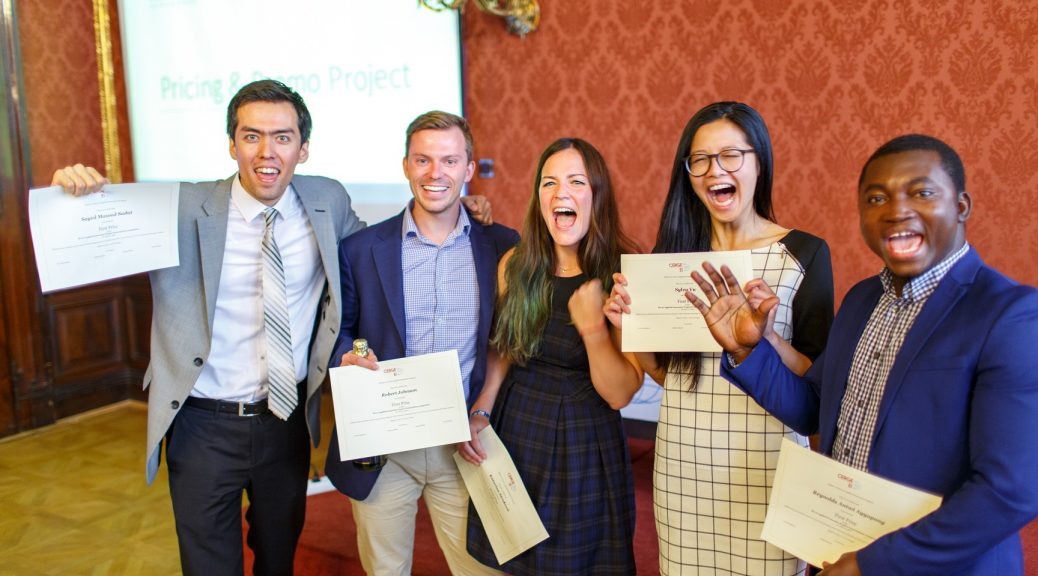 On Tuesday, 11 July, CERGE-EI’s MAE students presented results of their work in the Project seminar course. During the period of two months, they had been cooperating with companies such as Liftago, Nielsen, and the Platform for Social Housing, analyzing their data and suggesting the best solutions of the companies’ business problems.

The first group to give their presentation worked with Advanced Healthcare Management Institute and designed alternative scenarios of financing the Czech healthcare system through different health insurance schemes. Most of the scenarios developed considered the structures of the Czech patient body and applied models from different countries such as the Netherlands, Germany, and Switzerland. From the economic point of view, students aimed at a self-financing system in which revenues would equal expenditures. This led them to adjust the current system by introducing the nominal premium (a flat fee) as a substitute for the percentage contribution by employees and self-employed people.

The next group worked with Liftago, a company that created a mobile application allowing people to order a taxi online. Liftago’s app is innovative as it creates an environment where it is the taxi driver who bids for the customer, and the customer can choose which taxi they prefer based on price, distance and rating. The goal of the group’s project was to assess Liftago’s current business strategy towards its drivers, and to develop a new solution without affecting the driver’s income and incentive to drive while eliminating any fraudulent behavior at the same time. In order to investigate the drivers’ behavior and identify possible problems, real collected data was analyzed and processed.

The third group worked with Nielsen, the world’s leading market research company. Using real but anonymized sales and promotion data from Fast Moving Consumer Goods (FMCG) market, they worked to determine optimal pricing strategies for retailers in an unidentified town in the Czech Republic. The group worked with data on sales of 45,000 products for a period of over a year. They calculated the price and cross-price elasticity of demand for the products, and determined their price positioning within the same category of goods. This helped to provide specific advice to retailers on how to position the prices of their products compared to their competitors given the products’ elasticity. Additionally, the team suggested a method using cross-elasticities and sales to determine which products are more or less suitable for discounting. The results of their project have already been used to prepare an interesting product for Nielsen’s clients.

The last group worked with the Platform for Social Housing in collecting and analysing the demographic and commercial data as well as the real estate ownership information in the city of Brno. The push for urbanization has caused some adverse effects on the long-term residents of some areas as they are being pushed out of the city to make room for new developments. This project focused on finding the main characteristics of these areas and of the residents driven out of their dwellings, and on identifying (predicting) future potential victims of this gentrification drive in terms of the possibility of being evicted. The main conclusion was that poor people living in the areas with high potential of business growth are most likely to be evicted.

Each of the groups worked incredibly hard to find solutions to business issues and to suggest improvements, but there could be only one winner. This year, it was the Nielsen group, consisting of Masood Sadat, Sylva Vu, Robert Johnson, Katarína Strnková, Reynolds Agyapong Antwi, who were justly rewarded for both an innovative solution and engaging presentation. Join us in our congratulations and in looking forward to next years’ projects!