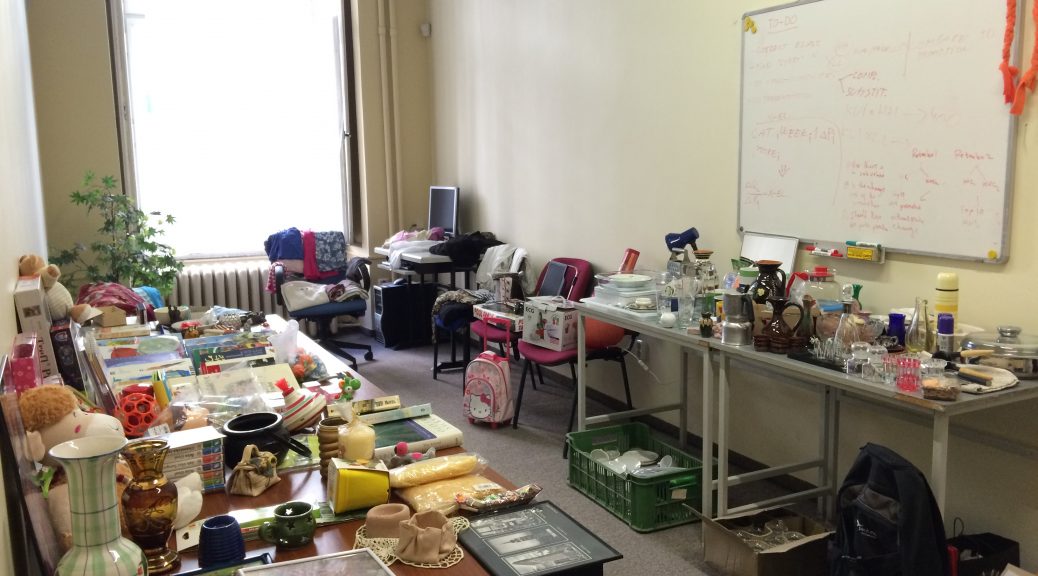 We all have things at our homes that we no longer need.  They may be brand new, they may be used, yet still in a good condition. Nevertheless, there is no one in particular around us who would like to take them. Such things only take up space in the household, yet it would be a shame (and environmentally unfriendly too!) just to throw them away.

That’s why Thursday, 22 June, there was the First International Bazaar at CERGE-EI. For a whole week before the event, multiple donators were bringing bags of items to the library office. Thanks to them, when the bazaar opened at 10 a.m., the library group study room was packed with objects. The variety of items on offer were abundant: clothes and accessories, toys, books, children’s goods, kitchen utensils, glass, ceramics, CDs, decorations, paintings, bags, small electric appliances… Everything was offered for free.

From the first moment, the “customers” were flooding in and most of the items found its new owner during the day. According to a trustworthy eyewitness, there were even several cases in which multiple individuals desired the same item. Though for a moment it could have looked like there was going to be a fight, the first one who came took the item – those were the rules 🙂

All in all, the event was a big success and we thank again to all of you who contributed. Those of you, who did not take part, don’t worry: Second International Bazaar is coming next spring!