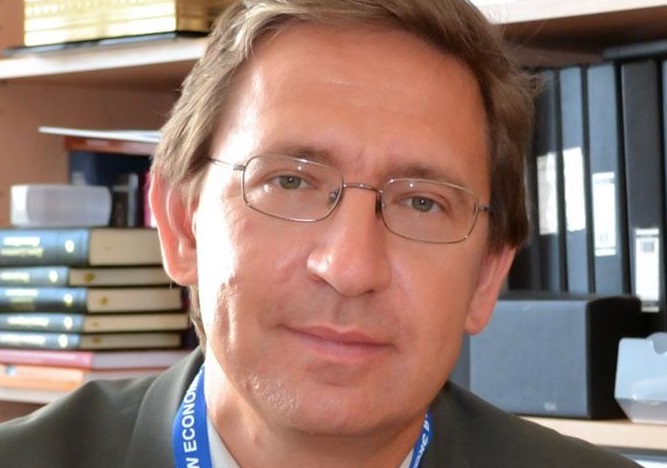 This year, CERGE-EI welcomed 5 new faculty members, which ranks among the most important hiring successes in CERGE-EI’s history for faculty expansion.

One of them is Stanislav Anatolyev who came to CERGE-EI with the position of full tenured professor from Moscow´s New Economic School (NES). At CERGE-EI, he will be teaching econometrics, which is his principal field of interest in teaching as well as in research.

Stanislav, when did you learn about CERGE-EI for the first time?

Hard to say exactly. CERGE (without -EI at that time) and NES were founded more or less at the same time, on similar grounds. I have always been keeping track of CERGE’s matters since I became a professor at NES. It was interesting to compare the paths of the two institutions.

When is the first time you visited CERGE-EI and on what occasion?

That happened much later, in 2009. At that time, I was travelling around Europe a lot giving scientific seminars, and CERGE-EI was one of the places I visited. That seminar was held in exactly the same room as they are held now, and what struck me was that the room was packed…

Why did you apply for the position at CERGE-EI? What was the most decisive factor?

I wanted out and away. Out of that country and away from that regime. At first, I was pretty slow when contemplating possibilities… But the assassination of Boris Nemtsov was the last straw that really sped up my decision making.  The question I asked myself was: Where could an NES professor feel comfortable at work, where could a Russian patriot feel at home? Of course, the answers were CERGE-EI and Prague!

You came to CERGE-EI from NES – are you still sharing work between CERGE-EI and NES? Does this fact have any impact on your career?

Yes, I still have some teaching and advising obligations at NES, most of which I’ll be fulfilling during the Summer semester. Of course, being able to teach related material to two different audiences and advising bright students at different levels – PhD at CERGE-EI and Master’s at NES – promises to be twice as interesting. Being present in the faculty of two institutions doubles the resources available for research. Lastly, the geographical duality increases the possibilities of professional contacts, which is very important for a scientist nowadays.

You know western as well as eastern universities well. Can you compare the two academic environments? Both from the student´s as well as the teacher´s position?

If any comparison is meaningful, it should be drawn between western universities and the new generation of eastern universities founded in the post-communist era and on the western model, including CERGE-EI in Prague, NES in Moscow, CEU in Budapest, HSE in Moscow, KSE in Kyiv, EUSP in Saint Petersburg or BICEPS in Riga. Keeping this in mind, one can say that despite certain prevailing discrepancies, these types of academic worlds are very similar. For example, in the western universities and the new generation of eastern universities alike, cheating and plagiarism are not acceptable, human interactions among students and professors are less formal and the atmosphere is more egalitarian, etc.

Your primary field of interest is econometrics. Can you describe a couple of applications of the methods you deal with?

One large field of applications is formed by problems of prediction – in macroeconomics (e.g., inflation) and in finance (e.g., the volatility of stock prices) alike. Another example could be the identification of how strongly one’s education, military service, parental heritage and other things of a similar nature affect one’s personal income.

Have the teaching trends in econometrics changed over the last decade? If so, in what way?

They did change quite abruptly, but this happened a bit earlier. While there has never been any lack of econometrics textbooks, it was not until the verge of the new millennium that a ‘new generation’ was produced by active researchers. The methodology in these new texts is centered around the so-called ‘method of moments’, rather than around an obsolete classical linear regression. Correspondingly, econometrics instructors had to follow the same trend in their courses.

Do economics students, and post-graduate students in particular, who gain expertise in econometrics find that they enhance their job prospects? In what kind of job specifically?

Absolutely. It goes without saying that econometrics is needed in all spheres of economic science which deals with data processing: central bank policies, empirical auctions, economic history, you name it. But, in my observation, what pays off most are the methods of financial econometrics. Those NES students, for example, who mastered such techniques in my research project, have been systematically in high demand from quantitative departments of leading banks and hedge funds.

Could econometrics be valuable for non-economics students? In what way exactly?

Anywhere where empirical analysis with real data is used, econometric methods are a valuable asset, for example, in such seemingly unrelated areas as weather forecasting, the prediction of traffic jams, and the identification of genetic patterns; to say nothing of the fact that statistical thinking helps shape one’s mind and enhances one’s outlook on life.