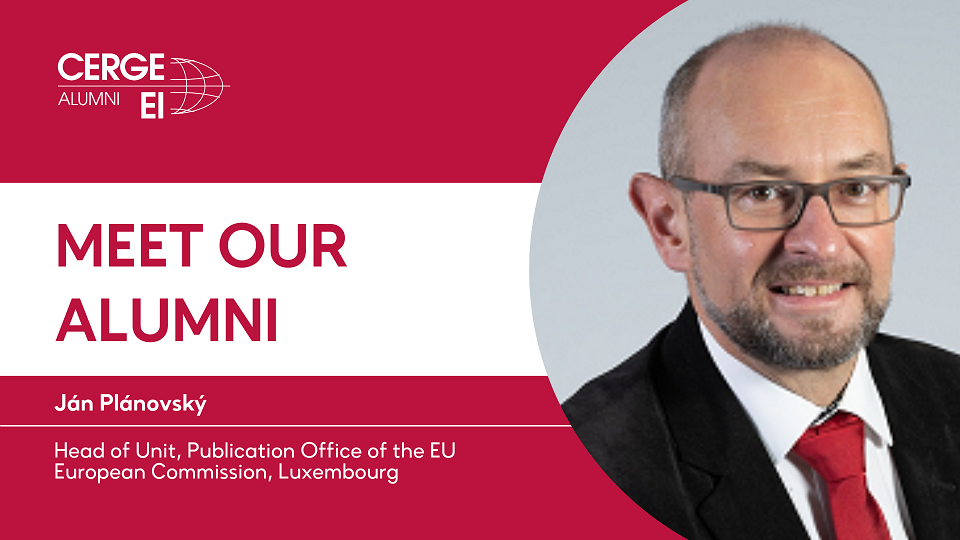 Ján Plánovský, our first cohort graduate, recently used an opportunity to visit CERGE-EI and give a lecture at our first #AlumniLive seminar about his work experience at the European Commission. How does he remember CERGE-EI and what was his career path? Read more on our CERGE-EI Blog.

You decided to join an EU initiative Back to University and visited CERGE-EI in October to speak about your 15+ years of work experience at the European Commission. How does it feel to come back and give a lecture?

After two years of living in social isolation and meeting colleagues in the virtual world only, I decided to apply for the renewed and in-person Back to University initiative promoted by the Czech Presidency of the Council of the European Union during the second half of 2022. Even though I visited CERGE-EI yearly such as at the Graduation Gala, this was the first time I gave a presentation since my dissertation defense many years ago.

It was a very special and nostalgic feeling being in the same room where I experienced my first internet communication back in 1991. Now, I was very impressed with how this room was converted to a modern auditorium equipped with a state-of-the-art audio-visual technology allowing me to give a live presentation with online web stream. This enabled my daughter working in the UK and my former collaborators in Trexima Bratislava to follow this presentation, among others. Therefore, I would like to use this opportunity to appreciate excellent organisation of this event by CERGE-EI staff and thank students and professors for their active participation and interest. Last, but not least, I wish to thank the European Commission Representation in the Czech Republic for providing printed publications about the EU to accompany my presentation.

You studied in the first CERGE-EI cohort. Can you go back to the early nineties and share your memories of your studies?

Very shortly after I completed my electrical engineering studies at Bratislava in June 1991, I moved to Prague at the beginning of July to start our 2-months preparatory semester at CERGE-EI. Instead of enjoying the holidays during that hot summer, I had to study the basics of economics, a completely new subject for me. But it was our excellent group of first-cohort students who motivated and supported each other, and soon we became real friends. Just to name a few of them, it was Krešimir Žigić, Dima Shemetilo, Martina Lubyová, Jacek Cukrowski, Viktor Tchistiakov, and Anton Marcinčin. As a group of students coming from different countries, we spent a lot of time together not only at school but also during our free time because almost all of us stayed at Kajetánka dormitory. The nickname of our favourite pub across the street was “Library”, so we often met for a beer there after a full-day of lectures and studies. Being in Prague, I closely followed hot political debates regarding the future of Czecho-Slovak relations. As you know, it ended-up with the “velvet divorce” on January 1st, 1993.

What were the best and most challenging studies you did at CERGE-EI during its first years?

For me, the biggest challenge was a combination of using English and learning a completely new domain of economics. Although I have a strong mathematical background from the faculty of electrical engineering, I still needed to make a lot of effort to grasp the content of the lectures taught by respected and highly demanding professors from all around the world.

In the summer of 1991, we started our studies at the temporary premises of Olšanské náměstí. It was a building surrounded with a nice piece of nature. We often walked to the hill nearby where we talked and learned together. Despite hard studies, the positive atmosphere of mutual support and collaboration was unforgettable. It was underlined by the excitement of living in a post-communist Prague, undergoing radical changes in all aspects of life.

For more than 15 years, you worked for a European Commission. What does working for an EU institution require?

To be precise, I started working for the EU on September 16th, 2005. It’s been more than 17 years. I finished my previous job just two days before on September 14th, 2005 after leaving a well-known American company Kimberly-Clark (KC) in my hometown of Piešťany in Slovakia. I spent seven exciting years there as a logistics manager with a young and dynamic international team.

It was the combination of having a necessary academic background from CERGE-EI and managerial skills acquired at KC that made me eligible for a middle-management post of Head of Unit at the European Commission (EC). Only a successful pass of demanding and lengthy EPSO[1] competition qualified the candidate to be placed on a so-called reserve list.

EU institutions may invite selected candidates from the reserve list for a job interview for a concrete post. In my case, the reserve list had around 20 names from all ten new Member States joining the EU in 2004. As outcome result, there were more jobs available than the number of candidates. Consequently, I was invited for interviews at five different Directorates General of the Commission, four of them located in Brussels and one in Luxembourg. Finally, I was luckily enough to be recruited by Eurostat based in Luxembourg, which was my preferred  business domain and geographic location.

For the past several few years, you’ve been working as the Head of Unit at the EU’s Publications Office. Can you tell us more about your work?

My current work includes management of human and financial resources to ensure that our main digital dissemination platform (https://op.europa.eu) is providing reliable services on a daily basis. The specificity of our Portal is its multilingualism as we provide services in all 24 official languages of the EU. Our main objective is to provide access to knowledge and information for further reuse by EU Institutions, researchers, businesses, academia, national administrations and anybody who is interested in EU Law, EU public procurement, EU publications, open datasets, research results and so on.

Our multi-national team consisting of 25 members is composed of web technology and design specialists, knowledge management experts, business analysts, and project managers. In addition to our daily tasks of updating web contents and making it easily accessible and findable, we are exploring new modern technologies based on artificial intelligence, such as machine translation and automatic speech recognition.

What is the strongest message that CERGE-EI gives to its students?

A multi-cultural and multi-national environment of highly talented and motivated students creating an atmosphere of collaboration, critical thinking, and mutual respect.

CERGE-EI, being a very demanding economic program taught by world-class professors of economics, creates an opportunity to study and work in international and highly competitive English-speaking environments. Thus, it is worth completing it despite difficulties and obstacles occurring during your studies. A successful completion of CERGE-EI opens doors to a variety of attractive careers, including research, banking, finance, policy making, and other highly qualified jobs in national governments and/or international institutions. I wish all CERGE-EI students perseverance to complete their studies successfully.