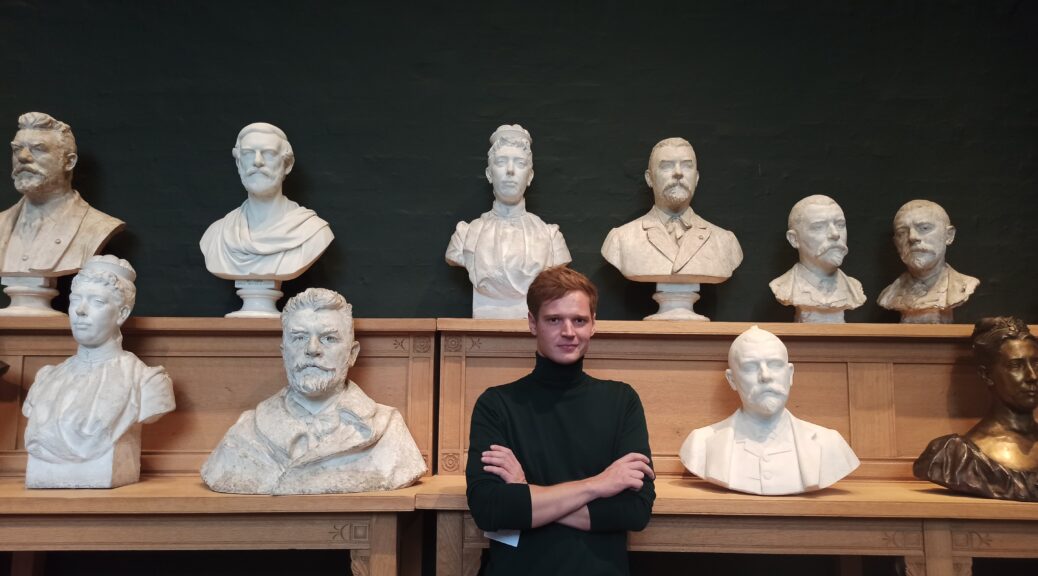 Read an interview with Andrei Matveenko, our PhD in Economics graduate from 2019, who now works as a Postdoctoral Researcher in Copenhagen. We spoke about Andrei’s positive influences during his studies at CERGE-EI, and his research interest in studying the role of information in Economics, namely the subfield Rational Inattention theory.

Since 2019 you have been a Postdoctoral Researcher at the Department of Economics at the University of Copenhagen. It’s been a year now, so how would you evaluate your first year in this position?

The year was extremely interesting and challenging at the same time. One of the challenges, of course, was the corona crisis – several months out of the year I had to work from home. However, I am very happy here in Copenhagen. The department is very big, so, naturally, the variety of topics that people are working on here is also wide. And among those topics there is a topic which is very similar to what I am interested in and for which my current supervisor, Mogens Fosgerau, has received an ERC grant.

Your research interest is in studying the role of information in Economics. Can you tell us more about your research?

The subfield of Information Economics in which I am mostly interested is Rational Inattention theory. The main idea in this strand of literature is that our attention is limited and we cannot take into account all relevant aspects of the choice problem. Instead, we choose the aspects that are the most important to us – we are rationally ignoring some sources of information. Sometimes we even choose something without exploring, just because we believe that one of the options is the best. Think about choosing a new phone: one can easily get lost in all the characteristics like the amount of megapixels in the camera or the capacity of the battery. We can start reading all the reviews about all phones, but that would simply take too much time. Typical a rationally inattentive person would create a shortlist of phones and then try to choose the best one without going too deeply into the details. Such inattentiveness has several important consequences, which are the focus of my research. First, in the paper with a recent CERGE-EI PhD graduate, Vladimir Novak, who is now working at Bocconi University, and a colleague from Columbia University Silvio Ravaioli, we show that rationally inattentive agents can become polarized in their opinions – one of the widely discussed features of the modern world. In another paper, which is a joint work with a PhD student from CERGE-EI, Sergei Mikhalishchev, we show that labor market quotas can decrease the amount of discrimination, which, as was documented by researchers from CERGE-EI, Vojta Bartos, Michal Bauer, Julie Chytilova and Filip Matejka, can arise as a consequence of inattention. In my most recent working paper, which is a joint work with an assistant professor at the University of Copenhagen, Egor Starkov, we explore the optimal strategy of targeted advertising when the consumers are rationally inattentive, and the firm has access to some data about the consumers, for instance, their internet search history.

Why did you decide for CERGE-EI for your PhD studies?

My primary education was in mathematics and I wanted to start a career as an academic economist. One of the options was to start a master’s program in economics in Russia and then to apply to various PhD programs abroad. Another option was to start PhD studies at CERGE-EI, because it offers courses in the first two years of study and the program is designed in a way that allows non-economists with a background in mathematics to become economists in a relatively short period of time. The latter option appeared more attractive to me. The fact that I had met several CERGE-EI graduates and current students, and their impressions of the institution were very positive also played a role.  I am extremely happy about my decision to choose CERGE-EI – the research topics here were very interesting and I received great support from my supervisor, Filip Matejka.

Definitely, the people. The students at CERGE-EI receive a lot of attention from the professors and my case was not an exception. All the doors were always open and I had a chance to have many consultations. The professors helped to make some of my research ideas better and patiently explained why some of my ideas were not that good. Also, as I said earlier, several of my papers are written together with fellow students – it shows that people at CERGE-EI are very open to cooperation.

What are your next professional plans?

I have a contract at the University of Copenhagen for two more years. I am very lucky because the postdoc contracts are often much shorter than three years. After the end of the contract, am planning to become an assistant professor, but it is hard to tell at which university, because the academic job market is quite unpredictable.