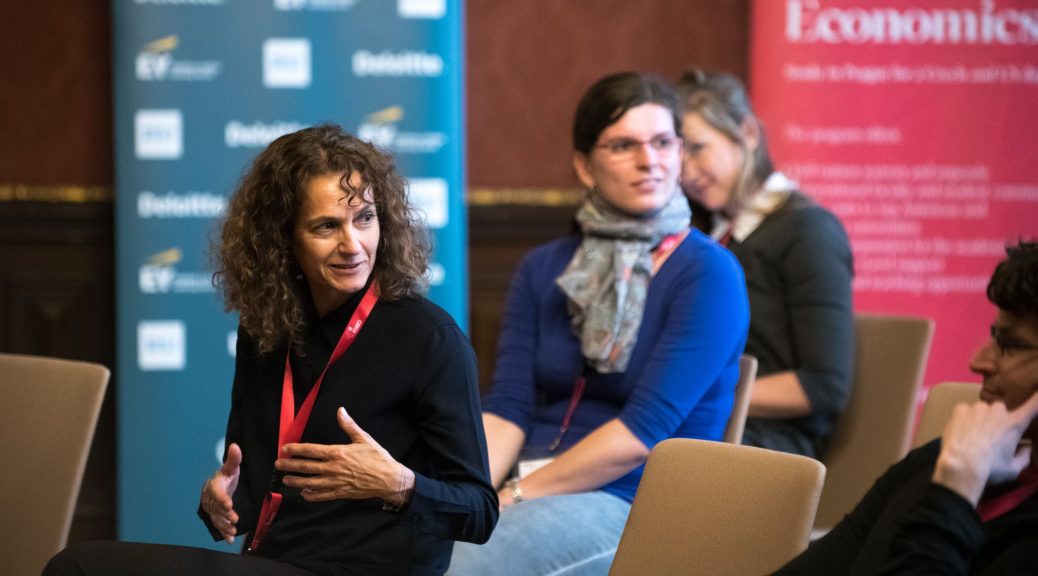 The final day of the 2019 Mentoring Program for Women Researchers took place on Friday 1st March 2019 at CERGE-EI. What started out as a plan to mentor CERGE-EI’s own women PhD students spread to a more open program to include PhD candidates from other faculties and subjects due to its popularity, as Lucia Stefankova, CERGE-EI’s Deputy Director for Development and PR, stated during the opening of the workshop.

Number of special guests and alumni travelled to Prague from as far away as Norway, Finland, England, Italy and Germany to present and take part in the panel discussions. They gave their time free of charge in order to share their experiences and support others in their pursuit of gaining a PhD.

The morning session was dedicated to career progression and opening the proceedings was a short presentation by Inés Hardoy from the Institute for Social Research in Oslo, speaking about the impact of children on the gender gap in management. In a study conducted by Dr Hardoy and her colleagues based on Norwegian data, they found that parenthood increases the management gap when the mother takes the primary caring responsibility for a newborn, but when the father shares parental leave, this gap is greatly reduced initially, becoming insignificant by the end of a 9-year period. Indications of the study are that in more recent years this gap is narrowing.

The first panel discussion was comprised of an esteemed panel of academics from an interesting variety of fields: Zuzana Brixiová (Technical University of Ostrava), Alexandra Tsvetkova (CERGE-EI Alumna, OECD Trento Centre for Local Development), Helena Fulková (Institute of Experimental Medicine, Czech Academy of Sciences), and Pavlína Louženská (Google Developers Launchpad). The whole event was moderated by Daniela Vrbová from Czech Radio. A strong theme among the items of discussion was self-confidence. The participants agreed that Czechs and Eastern Europeans in general are less self-confident and they had to push themselves out of their comfort zone in order to become more successful. Foreign experience was also attributed to their current success, where they were exposed to unfamiliar challenges that boosted their self-confidence.

All four of the panel members were very open in sharing their successes and failures. What was clear from them was that they made great sacrifices in terms of living away from family for extended periods, and giving up large amounts of free time in pursuit of career advancement.

After the coffee break the floor was opened to questions from the audience. Topics such as how to stay motivated after you’ve been working on a project already for a couple of years were dealt with. Alexandra Tsvetkova advised bringing in co-authors to provide a new impulse to the work. She also added that sometimes just a change of location can help bring new energy. Zuzana Brixiová added that it’s always a good idea to remind yourself why you are doing your PhD and what your ultimate goal is – if it’s to push science further or to help some people through your work. A strong piece of advice came from Pavlína Louženská, telling the participants to share their stresses and problems with friends and family, as bottling these things up will not end well.

The impact of social media was also discussed. There’s a lot of pressure these days to keep up with other people who are attending conferences, receiving grants and getting internships. This can cause a feeling of inferiority. The successes are always shown online but the failures rarely are, presenting a false view of reality. The advice in this case was to reduce your exposure to social media so that you don’t feel so stressed and under pressure by what others are doing.

The afternoon session, focused on publications and job market preparation, welcomed a new panel of experts and plenary speaker. Prof. Štěpán Jurajda, opened the session continuing the discussion on gender gap. He presented a variety of trends from research in relation to gender differences, and also discussed the impact cultural differences have on the gender gap and how the issue of higher natural competitiveness in males results in them being more successful. Evidence also suggests that women are biased against in a selection process – even when more women are on the selection committee, but a strong factor in boosting the success rate of women is the presence of female role models and therefore that is a good reason for the existence of this program.

The panel for the afternoon was composed of Inés Hardoy (Institute for Social Research, Oslo), Anastasiya Shamshur (CERGE-EI Alumna, University of East Anglia), Jana Cahlíková (CERGE-EI Alumna, Max Planck Institute for Tax Law and Public Finance, Munich), and Zuzana Fungáčová (CERGE-EI Alumna, Bank of Finland Institute for Economies in Transition). A lot of practical advice was given about the publication process and challenges that authors face. Among the key points mentioned here were that the abstract and introduction should be polished to the highest level possible, as it is often from these sections that editors decide whether to reject the paper immediately or forward it to reviewers.

The importance of attending conferences and networking as a way of developing contacts was also stressed as a tool for building a name. Zuzana Fungáčová strongly recommended writing on topics that you feel passionate about; firstly, you will enjoy doing the research more, and secondly, this enthusiasm (or lack of) comes across in conference presentations for the audience to recognize.

The whole panel agreed that researchers should aim to the highest ranked journal possible, while simultaneously realistically evaluating the level of their outputs and select corresponding journals for submission. A lively discussion ensued among the whole panel on the subject of co-authors. Various tips were given on how to choose and cooperate with them.

Anastasiya Shamshur gave a detailed presentation of how the job market works. This was presented from the point of view of an economist interested in working in academia.

The audience showed genuine interest and actively participated throughout the whole day. We hope that this workshop proved useful to the people who attended and will serve as motivation for them in their continuing PhD studies.