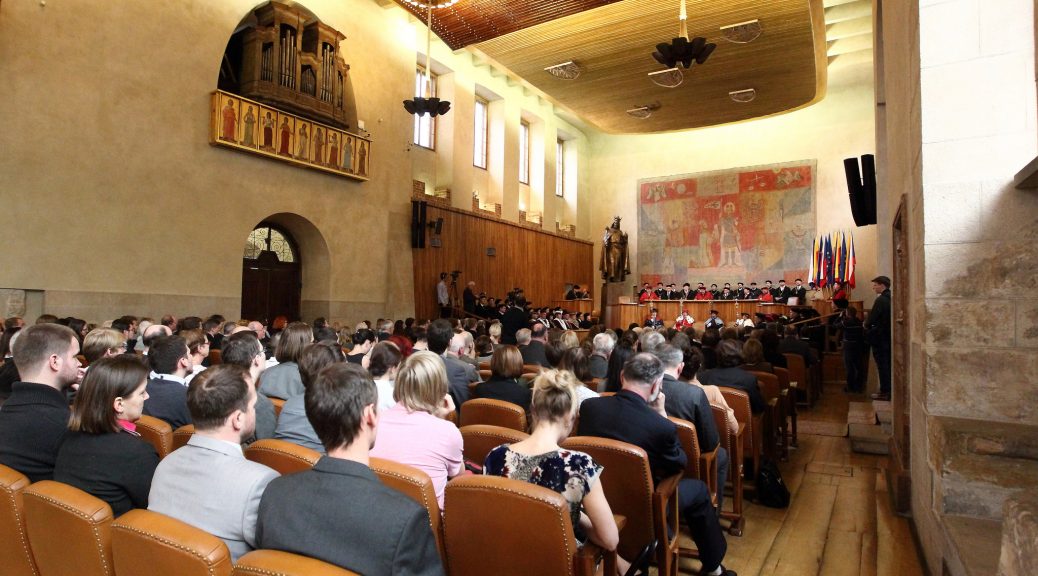 The proceedings were overseen by a larger-than-life bronze statue of King Charles IV in the Great Hall of Charles University’s Carolinum, and the awarding ceremony for Prof. Sims was indeed a grand occasion. The CERGE-EI community filled the hall to celebrate such a rare and special event.

The traditional pomp and circumstance was in full swing with no less than 68 scholars and dignitaries in their full regalia marching down the main aisle as officials to oversee the presentation of the award, all the while accompanied by live orchestral music from up on the balcony. Included among them were many CERGE-EI faculty members and the Director of CERGE-EI, Michal Kejak, who was present in the role of promoter. To top off the historical note, the significant speeches awarding the honorary doctorate were given in Latin, as tradition dictates in a 600-year-old institution.

A detailed laudatio, read by the Dean of the Faculty of Social Science, highlighted the main achievements of Prof. Sims’ life and career, including how he developed a statistical approach called vector autoregression, or V.A.R., as it is more commonly called today. It is mostly for this work that he received the Nobel Prize in Economics in 2011. Another significant part of the speech stated how Prof. Sims became a pioneer of rational inattention theory, an area of specialization popular with CERGE-EI faculty (Filip Matejka is his former student and current collaborator) and students today.

In his acceptance speech, Prof. Sims eloquently summarized his view of economics and described some of the defining moments of his career, from meetings with peers who denigrated his work, to theories that, he joked, if implemented would make most fiscal policy makers redundant. He also spoke complimentarily of CERGE-EI by mentioning the steps forward he can see it has taken since he joined the ESC in 2013.

The auspicious and pleasant afternoon was rounded off with a more informal reception, during which the ceremony attendees had the chance to congratulate Prof. Sims on his new honor.