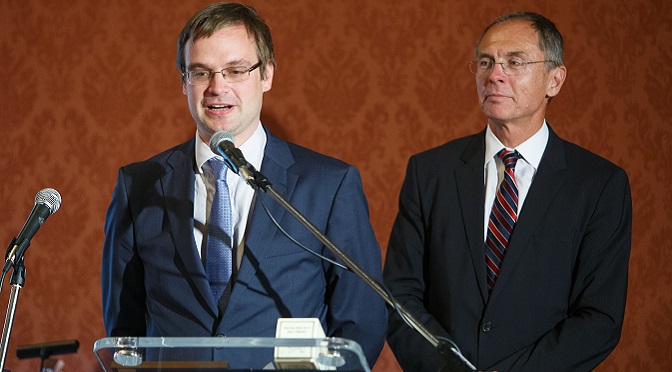 Filip Pertold (CERGE-EI researcher and 2010 PhD in Economics Graduate) has received an Honorary Award for his dedication to the popularization of economic research and its impact on society. Filip has actively participated in a number of projects and activities promoting economic research and CERGE-EI to professionals, students, the business community and the general public.

Filip has recently been involved in the CERGE-EI High School Project, the Czech Academy of Science’s Week of Science, the Science Cafe, an expert Roundtable on Public Policy in Pre-School anagement, the Human Resources Leaders Forum, a Roundtable on Poverty organized by the Sirius Foundation, a roundtable discussion entitled Women with Children in the Labour Market for the British Chamber of Commerce, a Conference on Aging Society for the Tatiana Kucharova Foundation, and many others.

Filip was awarded the Neuron Impulse Award in 2013. His fields of interest include Applied Microeconometrics, Public Economics, and Labour and Health Economics. His paper entitled “Manipulation of Procurement Contracts: Evidence from the Introduction of Discretionary Thresholds” has recently been published in the American Economic Journal.

This is our short interview with Filip:

Does the award come as a surprise to you?

Yes, it was a total surprise for me.

The aim of the award is to recognize those who help CERGE-EI disseminate research and raise awareness about the institution. Do you think that recognition can inspire other people, including our current students?

I hope more and more researchers will engage in the popularization of economic research. It is crucial that the general public understands our research agenda so that they can make more rational choices in elections and that policy makers understand the importance of economic research for the well-being of society.

Do you think that the purpose of the IDEA think tank, which you coordinate, is understood by the general public? Do you have the necessary resources to explain and promote your research?

I think IDEA is a great project that puts CERGE-EI ahead of many other academic institutions in the popularization of economic research and its impact on public policy and society. I understand this award as a confirmation from CERGE-EI that we are doing a good job in this type of activity and that we should continue with our efforts in the future. Of course, funding is very important, but it must go hand in hand with opportunities to work in the company of excellent researchers who are able to speak to broad audiences. I have to admit that finding such researchers can be a difficult task. I should also stress that our activities are greatly supported by the Academy of Sciences, which is putting a lot of energy and funding into the popularization of research.

It is a long-held belief that more educated societies are less vulnerable to manipulation.  However, in todays’ society, information overload makes educating the general public more challenging. Do you think that there is an increased need for opinion-leaders who will take responsibility for interpretations and strategies?

I do not think we need more opinion leaders. We have too many people around who have strong opinions, usually based on their subjective beliefs. In fact, we need more people to provide fact-based analyses, and to offer the most plausible interpretation of the observed facts, but who also describe other possible ways to interpret them. Based on my experience, Czech legislation and public debate are frequently based mainly on observed associations that often have nothing to do with actual causality, and our empirical policy research should help us learn something about true relationships, which may lead to more efficient governance.
One example could be antidiscrimination laws, which are often based on beliefs about how markets discriminate against workers with different characteristics, but in fact, policy makers usually have little knowledge about the true nature of discrimination and, moreover, they often wrongly interpret the statistics at their disposal. Our analyses should help to target antidiscrimination laws so that they more efficiently help the affected workers.

Popularization of science surely requires patience and the ability to explain complex concepts plainly. Do you actually benefit from this process; do you get new ideas when trying to explain things in a new way?

Well, I think I do learn a lot about how to communicate our conclusions and suggestions. I also learn about the perceived importance of different topics from the “outside” perspective, which is helpful for grant applications, for example. In any case, it is a never-ending process of learning.