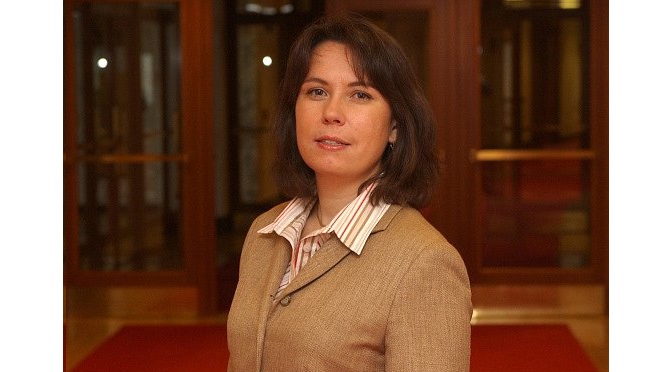 You have recently been elected as the IMF Executive Director for Austria, Belarus, Czech Republic, Hungary, Kosovo, the Slovak Republic, Slovenia, and Turkey. What is your biggest goal for next two years?

After more than 70 years, the Czech Republic can directly influence the decision making of the International Monetary Fund. I am deeply honored to have been given this opportunity to represent the eight countries of our so-called Central and Eastern European Constituency in the IMF Executive Board.[1] My predecessors – Johann Prader from Austria and İbrahim Çanakcı from Turkey – helped to establish a strong reputation of our constituency as  influential, pragmatic and well-run. I have an ambition to further develop this tradition, to promote the multilateral character of our institution and to represent an authentic and consistent voice of countries of Central and Eastern Europe in the IMF Executive Board. As one of only two women on the Board, I also intend to work with my colleagues on promoting awareness of the benefits of diversity for corporate culture and decision making, and on identifying actions that we could take in the short- to medium term to enhance a gender diversity of our Board.

This post ranks you, by all means, among the most successful CERGE-EI graduates. The CERGE-EI alumni community counts about 500 people now, including those who are at the beginning of their careers. Is there any message that you would like to share with them?

CERGE-EI has been very successful and many of its alumni have achieved amazing careers and live purposeful lives. CERGE-EI has given us excellent tools to succeed among global competition via a first-class education and very real experience of living and working in a multicultural environment. These are tools with which our growing community of graduates can make a real difference in our own countries and in dealing with global issues, whichever profession we end up choosing. For me, it has always been important to dream big, take risks in my career and dare to think outside the box. But I could not achieve any of this without having a safe harbor to come back to from all my ventures– my family which I am growing with my wonderful husband of 22 years, Ondřej Schneider, also a CERGE-EI graduate.

During your career, you were quite often “the first woman who…”. Do you think that asking successful women questions about their view on gender equality can motivate young women in their field to dare more? Or are they routine questions which do not really change anything?

There is a great quote of Madeleine Albright which I think says it all: “There is a special place in hell for women who don’t help other women.” The truth is, the professional world, especially in finance, is a tough playing field, and it is much easier to play on it if you feel you are part of a team where others share similar struggles or – even better – know how to overcome them. And it is much more fun too! For me, having successful role models has been very helpful in all stages of my career. They did not have to be public figures or very senior on a management ladder. When my son was born 17 years ago, I learned from my good friend and a successful investment banker in a large London bank how you can come back to work a few months after having a baby while preserving sanity. This has hugely helped my self-confidence and resolve as this was a rather uncommon path to consider at that time in Prague. Having a public voice perhaps helps to reach a bigger audience, so even though these kinds of questions do get a bit repetitive, I am always happy to share my experience in a hope of giving a gentle pat on the back or a nudge to another hesitating soul. It is worth the effort for all of us and for the sake of our sons and daughters.

You were admitted to CERGE-EI’s first cohort, in 1991, and graduated in 1997. So you literally saw CERGE-EI being born and grow. What was the most important thing about it for you, back then?

When I came to CERGE-EI in 1991, this was the only place in Prague where modern “western” economics was taught at the graduate level. And it was very much a “construction site.” Even so, there were many dedicated people who worked incredibly hard to make it happen, we had excellent professors and access to an ever-expanding library. I did not know much about economics in the beginning, and was not quite sure whether I want to study it. What I knew, was that I did not have the right skills or education for this new world which was taking up in front of me. Having grown up in a socialist society where cynicism was for many a self-preserving behavioral norm, it was very inspiring to see people like Jan Švejnar and Jozef Zieleniec pursuing a noble goal to build an economics program from scratch and working tirelessly to make it happen at a level that would be truly competitive internationally, without slack. This is what made me stay.

You have worked with leading economists from the whole world, including Jeffrey Sachs. Who influenced you the most?

I have to mention Randy Filer. He was a constant presence at CERGE-EI during my student years, always available to answer a question, give advice to a lost soul redrafting her dissertation for the umpteenth time or crack a joke. Randy taught the labor economics class in my second year at CERGE-EI and oversaw my dissertation work. But most importantly, I have learned from him how to think about tradeoffs, incentives, incomplete contracts and many other key economic concepts, and how to apply this dry theory to real policy issues. He and his wife Barbara helped many of us when we travelled to the US for studies or work, opening their house and hearts to us in the foreign land. I would always be grateful to them for their generosity.

To which period of your career do you look with greatest satisfaction?

This sounds like a pre-retirement question (laughs) … I have had diverse and fascinating professional opportunities throughout more than 20 years. They all gave me important experiences and taught me many lessons. I have been fortunate to assist in the early stages of unprecedented and successful transformation of the Czech economy into a market-based system with modern structure and advanced institutions, including in the key moments of bank privatization; setting up prudential and market conduct regulatory and supervisory framework for the financial system; and helping to establish our central bank as an institution with a high degree of credibility whose approaches to inflation targeting are seen today as a model of best practice around the world. My stints in the private sector have taught me important managerial skills and helped me to appreciate the importance of incentives and industrial organization theory in ensuring effectiveness of any regulatory system. While looking in the rear mirror is a healthy activity in both professional and personal life, I am at a stage when I do it more to derive lessons on how to do better in the future, rather than with an aim to balance past achievements. And I like to believe that my greatest challenge to conquer still lies ahead.

From your point of view, how has the banking sector changed over the years, particularly in terms of values, such as trust?

Financial system is an industry which requires trust for its very survival and stability. The global financial crisis eight years ago was a huge wake up call. We saw how quickly can this trust evaporate, and what are the consequences. But how can the trust be (re)built? You have to start with the ethics. I firmly believe that people’s behavior can be changed and that focusing on instilling the right values is as important as setting up the norms that promote right economic incentives. For the latter, many reforms already took place that over time should impact financial institutions in a way that should prevent excessive risk taking, such as stricter regulation and oversight of compensation rules, focus on more intrusive supervision, governance improvements and greater transparency. Financial institutions are also waking up to the importance of corporate culture, and to the reputational risks and very real financial costs of violating rules and trust. Instilling the values and individual accountability will take much more time than changing laws, however, and much work remains to be done by the private sector, global regulatory community and all of us, customers. But it is very important that we do not give up. I am very happy that the IMF has been actively engaged in the global public discourse about promoting the ethics and integrity in finance, alongside the reform of regulatory rules. Because a more ethical financial system will also be a more stable financial system, and whether something is right or wrong cannot be simply reduced to whether it is permissible under the law. What is ethical is what you do or don’t do even when nobody is watching.

[1] Decision making at the IMF is designed to reflect the relative positions of its member countries in the global economy. Each of the 189 member countries is assigned a quota, based broadly on its relative position in the world economy. The Executive Board is responsible for conducting the day-to-day business of the IMF and is composed of 24 Executive Directors, who are appointed or elected by member countries or by groups of countries (constituencies), and the Managing Director, who serves as its Chair. http://www.imf.org/external/np/sec/memdir/eds.aspx