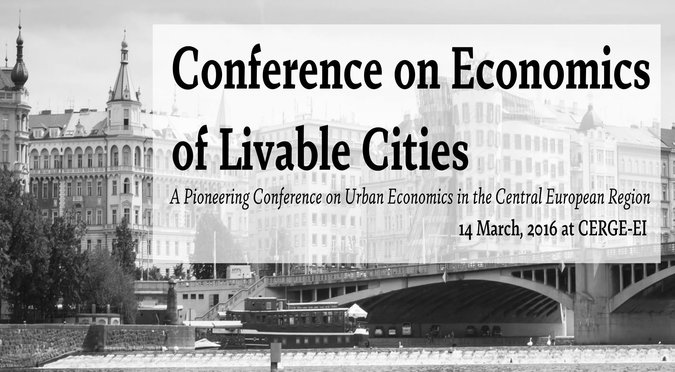 What drives the popularity in urbanization, and what are the results of endlessly growing cities? Considering everything from entrepreneurship to neighborhood segregation, prosperity and welfare of society are at the heart of these questions; asked not only by economists, but all those fascinated in the future of urban living.

On March 14 a group of Economists researching in the Urban Economics field came together for the Conference “Economics of Livable Cities” in Prague. Drawing in a diverse audience from students to Architects, the day was dedicated to exploring the issues that confront modern living.

The conference opened with a warm welcome from Dr. Gabriel Ahlfedlt, Professor in Urban Economics and Land Development at the London School of Economics and Political Science.

Although he couldn’t make it in person, a succinct video sent from his office in London set the tone for the day’s event. The goal of the conference, Dr. Ahlfedlt said, was to showcase the underpresented field of Urban Economics by discussing a variety of ideas that are important to understanding how cities work.

The beauty of Urban Economics is the intuitiveness, having lived or worked in a city at some point in our lives, “everyone is an expert on cities.” In Dr. Ahlfedlt’s view, the biggest question urban economists have been thinking about for the past decades is to understand the reason why there is such a strong force of demand of and supply for high-density areas. Offering answers of increased productivity, better amenities and the rising land prices that drive skyscrapers to be built. Yet, the urbanization expert admitted there is still a lot more to be explored, inviting the key guests to present their work.

Urban vs. Rural; Global vs. Local; West Side vs. East Side

The morning session commenced with Dr. Giulia Faggio from the Department of Economics and Quantitative Methods, at the London School of Economics.

Contrasting with a more macroeconomic perspective of urbanization, Professor Jens Südekum from Heinrich-Heine University Düsseldorf discussed his study “Adjusting to Globalization – Evidence from Worker-Establishment Matches in Germany”. Looking at long-term earnings and labor mobility, the research suggests that, although there are always winners and losers when it comes to globalization, the loss might be bigger than the gain when it comes to labor market responses to international trade shocks.

Dr Stephan Heblich from the University of Bristol ended the morning session with an interesting insight into neighborhood segregation due to city pollution. His paper “East Side Story: Historic Pollution and Neighborhood Segregation” shows that the eastern sides of British cities are often dirtier, lower income and less developed than their western counterparts due to western winds carrying pollution during industrialization and the post-industrial era.

The fact that the middle and upper classes tended towards the cleaner west ends whilst working and lower classes stayed in the eastern sides explains about 25% of the deprivation in the neighborhoods today, which continue to reflect the disparity.

Following discussion and a hearty lunch break the afternoon session kicked off with talk of housing. Dr Laurent Gobillon from the Paris School of Economics took a more technical approach with his paper “The Production Function for Housing: Evidence from France” that found a linear relationship between percentage growth in structure size and percentage growth in house prices in France.

The last guest speaker took a glimpse at how we might expect urban areas to look in the future, weighing up the pros and cons of a megacities compared to smaller interconnected cities. On his paper “Urban Networks: Connecting Markets, People and Ideas”, Dr. Giacomo Ponzetto from the Universitat Pompeu Fabra Barcelona considered a theoretical approach to understanding the benefits of a tightly linked network of urban areas.

Although connected smaller cities have more diversity, less congestion and cheaper living costs, megacities offer greater worker mobility, higher wages and more entrepreneurship due to the exchange of ideas under such close proximity. Taking into account preferences of local amenities, the constraints of housing supply and the ease of innovation, Dr. Ponzetto roused questions of how Europe may continue to expand in the coming years as smaller towns continue to grow.

What we should expect from future Urban Economics research was explored by all the guest speakers in the final panel discussion at the end of the conference. A challenge posed to economists is how they can collaborate with architects and urban planners with a more applied approach in the future.

The importance and focus on data-oriented research was also given a mention, as the speakers agreed that empirics seem to be the way to go for many fields in economics as well as trying to incorporate more case studies as something that is generally lacking in the discipline.

No doubt as Urban Economics continues to develop it will have considerable influence on how we approach questions of modern living.

Watch the event online, including the slides: