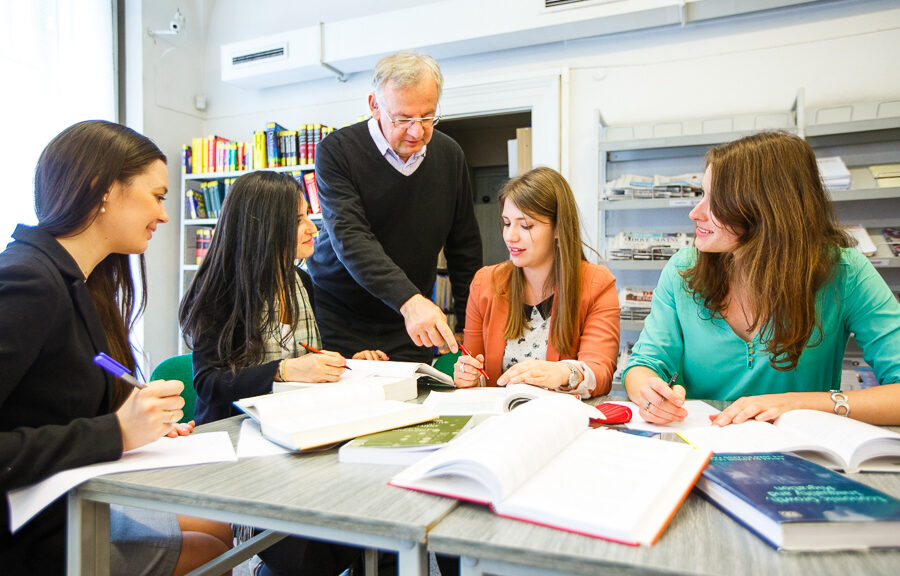 Krešimir Žigić,  Citigroup Endowment Associate Professor with Tenure at CERGE-EI, and a Ph.D. graduate from 1996, studied in the first CERGE-EI cohort. How does he remember the atmosphere of the first years of our institution and why did he decide on a career in academia? We asked Krešo several questions for our Blog interview.

Let´s go back to 1991. CERGE-EI was established and you started to study in its first cohort. How did it happen that you came to Prague from Croatia to study at a completely new institution?

Well, at that time I was a teaching assistant at the Faculty of Economics in Zagreb. It is important to stress that a teaching assistant was a fully-fledged job, a kind of a permanent (starting) position quite different from the student TA positions at CERGE-EI. It was common practice at my former faculty that a young teaching assistant, before writing her or his thesis, went on mobility for a year or so to the USA in order to take part in a typical PhD program. I was hoping that I would soon travel to the USA in order to take part in the first year USA PhD program. That was all-around 1990. An older colleague of mine had just returned from a one-year stay at the economics department of the University of Pittsburgh where he got in touch with Prof. Jan Švejnar, who was the professor there. I was hoping that I would follow suit and also go to the Pittsburgh economic department. Just about when it was my turn to go, Prof. Švejnar informed the bosses at my department in Zagreb that he was about to start a US-style PhD program in Prague so there would be no need for me to go all the way to the USA but to go instead much closer to Czechoslovakia.  The rest is history.

How was the atmosphere at CERGE-EI during your studies? What was the best and the most challenging about studying there?

The atmosphere was great. We did our best to help each other and to fill the gaps that we had initially. There was a group of very strong Russian mathematicians, who helped me to comprehend dynamic optimization while I, in return, helped them with basic economics and its terminology. So apparently the key challenge for us, who were trained in (not so mathematical) economics, was to understand the applications of advanced mathematical and statistical methods in economics, while the challenge for the mathematicians was to understand the logic of economics as well as the economic interpretation of the mathematical formulae, outcomes, and results.

Are you in contact with your peers from the first cohort?

Yes, I am still in contact with 4 or 5 colleagues of the very first cohort of CERGE-EI. We exchange emails from time to time and are very happy when we meet at the CERGE-EI graduation Gala dinner.

You are a Citigroup Endowment Associate Professor at CERGE-EI. Why did you decide on a career in academia?

Well, academia means, among other things, teaching and contact with the students. Let me tell you that both of my parents were high school professors, my sister is one of the best chemistry teachers in Croatia. My fraternal grandmother was a teacher and her uncle was a teacher and the director of the elementary school in a small city in Croatia at the turn of the 20th century, so I am already in the fourth generation of teachers in my family. On top of that, I enjoy reading and learning about new research in economic theory and applied microeconomics and I am eager to apply some of these concepts in my own research.

You remember CERGE-EI since its beginning. How has CERGE-EI changed in its three decades?

The changes have been dramatic. CERGE-EI relied substantially on foreign Western faculty for more than a decade, I guess.  Moreover, the focus of the in-house research was mostly on the theory and practice of economics of transitions in that period. In the last decade or so, however, CERGE-EI has grown into a very respectable economics department widely and is recognized worldwide for very strong theory and also macro groups which are at the frontiers of research in their respective fields, and the people from both groups publish in the very top economic journals and earn the most prestigious ERC grants. Moreover, CERGE-EI is widely recognized for the quality of its students and graduates.

What are the most memorable milestones for you?

It was the moment when I was granted tenure and I guess this is the typical milestone for most assistant professors.

I guess it is the determination and commitment of the university to provide the students with a high-quality education, academic integrity, and opening a door for them to both top worldwide academic positions and high positions in the public and business sectors.

2 thoughts on “MEET OUR ALUMNI: I AM ALREADY IN THE FOURTH GENERATION OF TEACHERS IN MY FAMILY, SAYS KREŠIMIR ŽIGIĆ”